‘Did e.tv unsign the code of conduct?’ – Fans react to raunchy new show ‘The Black Door’

The new risqué adult drama series 'The Black Door' has a brilliant cast who will shock you with their secrets, but also steal your heart. 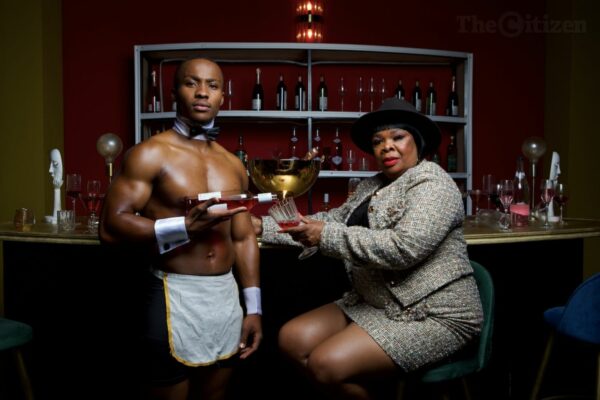 This week, e.tv viewers were treated to a saucy new show called The Black Door and after watching the first episode, many could not believe their eyes.

According to e.tv, The Black Door is a provocative new series, set in the high-stakes world of a pleasure-dome brothel, uncovering dramatic and emotional stories that will resonate with viewers.

The brothel, hidden behind a toilet paper manufacturing factory, is called The Black Door and is an exclusive private venue owned by Mam’ Rebecca (Linda Sebezo). There, she treats her business associates and thanks them “in-kind” for facilitating her tender frauds and bribes.

The story of the show begins with a long-distance truck driver named Khaya (Zamani Mbatha), who shares a dream of owning a fleet of buses with his older brother, Chuma (Thobani Nzuza).

Viewers soon get to witness how he receives an unexpected windfall as the family deals with a mysterious death when Khaya soon learns that his brother has been murdered.

“To repay the money stolen by his brother, he’s thrust into a seedy world of sex, drugs and tender fraud. Will Khaya agree to be a sex worker and make big bucks at The Black Door, or will he suffer the same fate as his late brother?”

Produced by Black Brain Pictures, this risqué, adult drama series has a brilliant cast who will shock you with their secrets, but also steal your heart with the emotion behind their stories.

Shortly after the show began, it was announced that celebrity entertainer Zodwa Wabantu will make her scripted television series debut in The Black Door this week.

Zodwa will play herself on The Black Door and will make her cameo appearance on Thursday, 14 April.

She says she came on board with the series because she appreciated that Black Brain Pictures has gone underground to reveal what is already there.

“There is a world of nakedness and freedom, a beautiful world that no-one wants to talk about. These are the stories we should talk about.  It is happening, they are there, and people turn a blind eye, but our husbands and boyfriends go there. There is nothing to be ashamed of because they are feeding their families. The sex industry is big, and it lives,” said Zodwa.

“These girls with their jobs, they’ve opened the door for me. Now I am accepted as a dancer because sex sells and I am selling my body,” added the icon for body positivity and expressing sexual freedom in South Africa.

The cast of the show is well balanced with some legendary actors and actresses, some well-known faces and also some newcomers.

On the surface he is a leader in his community and in his church, is very family orientated. However, this charismatic pastor is actually living a double life to provide for his family.

He would also do whatever it takes to live the dream he and his brother always had.

Described as a selfless and discerning man with a spine, Chuma is extremely observant often scanning his surroundings and seeing more than most people would.

He is also well endowed with a Midas touch when it comes to sex.

The fact that he is a pastor makes him very popular among different clients.

Mbatha, who also stars in the eVOD Original Is’phindiselo plays Khaya, a truck driver who comes home to start a bus business with his brother.

He ends up having to take over from Chuma at the factory and doubling up at The Black Door because he needs to repay Mam Rebs the money she claims Chuma stole from her.

He is living a double life and hates it but tries his best to not be exposed.

He will find himself having to cross certain lines he never thought he would cross and often questions whether or not the dream he has held so dearly is worth going against everything he has ever thought he was.

Also known as Mam Rebs, she is a ruthless businesswoman and avid Golfer.

Tough, hardworking, ambitious, and ruthless, she is street smart and has adopted a tough and masculine attitude.

Rebs has claimed the number one spot in a dangerous business environment, eliminating all competition through raw ingenuity and illegal gumption.

She loves her grandson and has a daughter who is her weakest link.

She is innately maternal, but life has forced her to be cruel.

She sees herself as honourable and praises the values of “honesty and hard work” even as she works to build one of the largest brothels in Emalahleni.

Boni is Mam Reb’s daughter. She is an addict, with mental health issues who is constantly in and out of rehab.

“Reserved and delusional, seemingly living in her world. She is gullible but also lovable. A mother and wife, with her husband and child living in her family home. No one takes her seriously and so she questions herself a lot as she often loses her grip on reality. She is easily the one person everyone should be wary of as she knows and sees a lot.”

Nkanyiso, played by Mzikayise Makroti: Nkanyiso is Bonnie’s lover – a man with a plan to keep Boniswa incapacitated.

He gets the upper hand over Mam Rebs when he finds out some damning evidence that stands to destroy her but going against Mam Rebs may be his own undoing.

Known as Junior, he is Mam Reb’s Toy-Boy.

A handsome young man who loves the finer things in life, dresses well and can only afford his lifestyle thanks to his sugar mommy’s generous handouts.

He doesn’t have a backbone but he also doesn’t care.

A submissive people pleaser who knows where his bread is buttered, but also believes he deserves to have it all. Loves himself enough to want to have another lover.

Frans has lived most of his life living life by the book as a respectable member of society.

A seemingly upright family man with a wife and one child. He prides himself on his perfect family as a strict dad to a smart daughter.

He has sacrificed a lot for her to get the best education and doesn’t burden his family with how he affords their comfortable life.

He used to work hard, making an honest living, but has since given up on the system and found a way to make it work for him, by processing local tenders to the highest bribe bidder.

As reward for his risk taking, he now gets to enjoy the perks of unlimited access to the seedy underworld of a private brothel, owned by his favourite client: Mam’ Rebs and he will do anything not to be found out – especially given that he has a taste for a few forbidden fruits…

In addition to being Khaya’s love interest, Nandi is a book smart girl having just graduated from business school at Stellenbosch. Because of her time at University, she has somewhat of a worldly outlook on life.

Although a bit naïve, Nandi is a confident only child who knows what she wants. She can’t wait to finish her internship then move out of Emalahleni so she can be independent.

She is currently living in her parent’s house and they are very strict but, since she has just fallen in love, she is determined to introduce Khaya to them.

The Black Door began on Monday 11 April at 9:30 pm and will air every week night.