300 subsistence farmers have been affected in the Omusati region alone, with more than 5,000 farming households expected to be impacted. 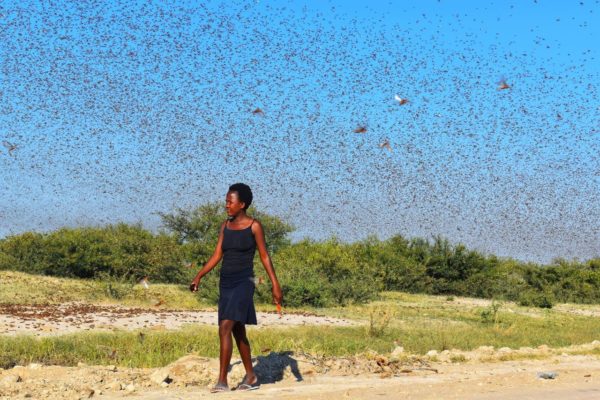 A girl walks in the midst of a cloud of locusts in Ekamba village, Omusati. Photo: FAO/Phillipus Tobias

Distressed Namibian farmers expecting a plentiful harvest this year now have to contend with droves of African migratory locusts threatening to undo months of hard work.

An estimated 300 subsistence farmers have been affected in the Omusati region of Namibia alone, with more than 5,000 farming households expected to be heavily impacted. “In all my 75 years of life I have never witnessed something as horrifying as this,” Elim communal farmer Wilhelm Asser told the Food and Agricultural Organisation for the Un(FAO).

The FAO said Elim is one of many villages joining a growing list of hundreds of locust-infested farmers in parts of Namibia, said to affect thousands of local residents now facing serious threats to their livelihoods.

“Most farmers in this village feel helpless and powerless against the menacing locusts.

“They come in their thousands and quickly attempt to devour everything in their path that is green; we are very frightened by their viciousness,” said Absalom Nembenge, a communal farmer in Ekamba, east of Elim.

The FAO said farmers are now resorting to deterring methods such as burning tyres and making noise in attempts to keep the pests at bay. A woman in Ohangwena carrying a sheet of corrugated iron and a stick to ward off locusts in her field. Photo: FAO/Phillipus Tobias

“The locusts descended upon our crop field like a devastating cloud around 4pm on Sunday. I was highly alarmed and quickly called my wife and the children to join me in the field to ward them off.

“We spent an entire afternoon burning tires and banging metals, corrugated iron sheets and pots to create noise that we hoped would scare the locusts off,” Nembenge recounted. 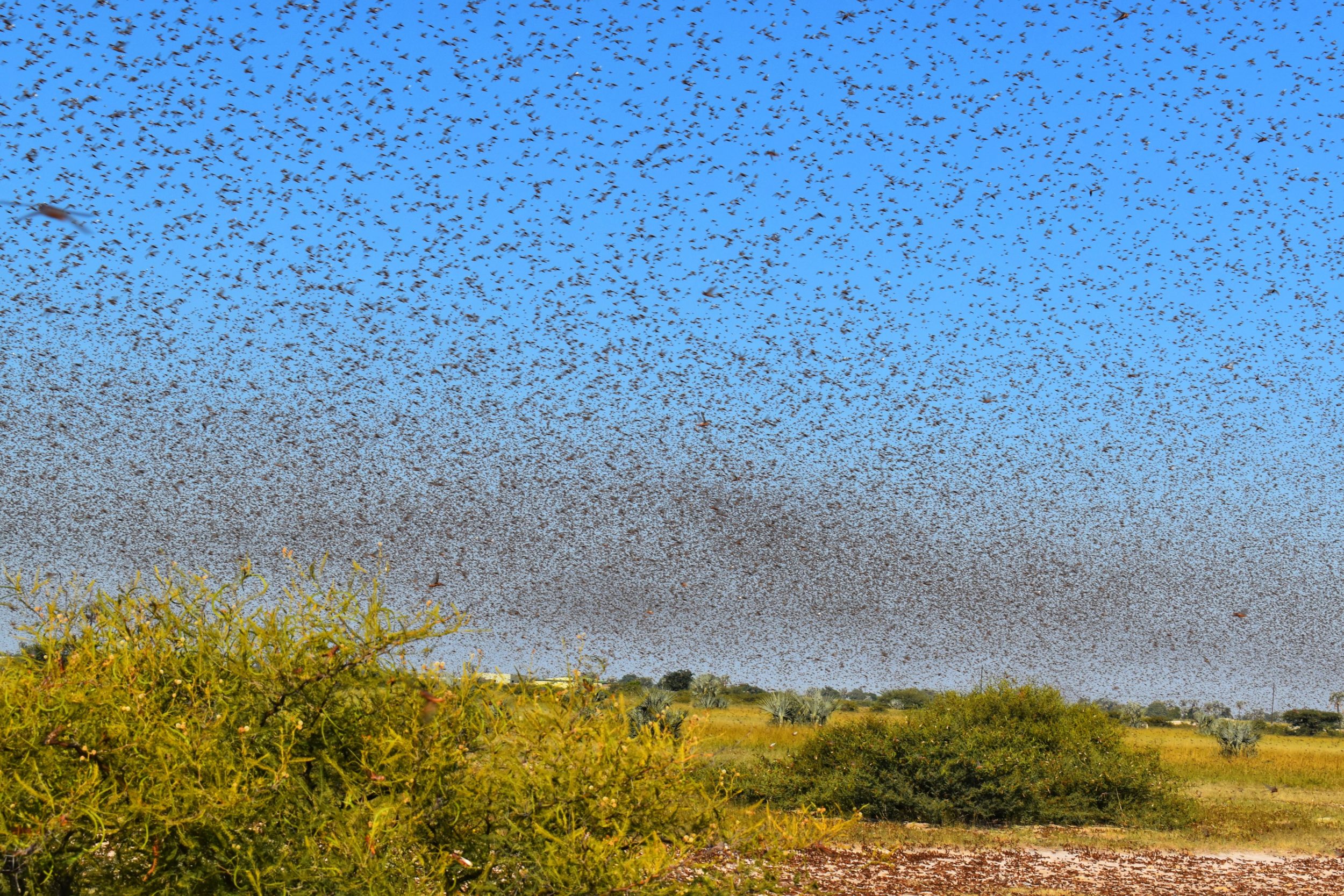 Swarms of locusts pictured flying over a village in Namibia. Photo: FAO/Phillipus Tobias

Agricultural extension officers clad in white overalls and black gumboots are now at the front line of the bug-infested battle, knowing full well there is no time to waste.

Thousands of farmers now have to put their faith in locust spraying teams, comprising agricultural officers and members of the Namibia Defence Force. “We are the last line of defence for thousands of farmers across the country, which is no easy task but we remain committed to ensuring that livelihoods are not severely impacted,” Shilunga said. 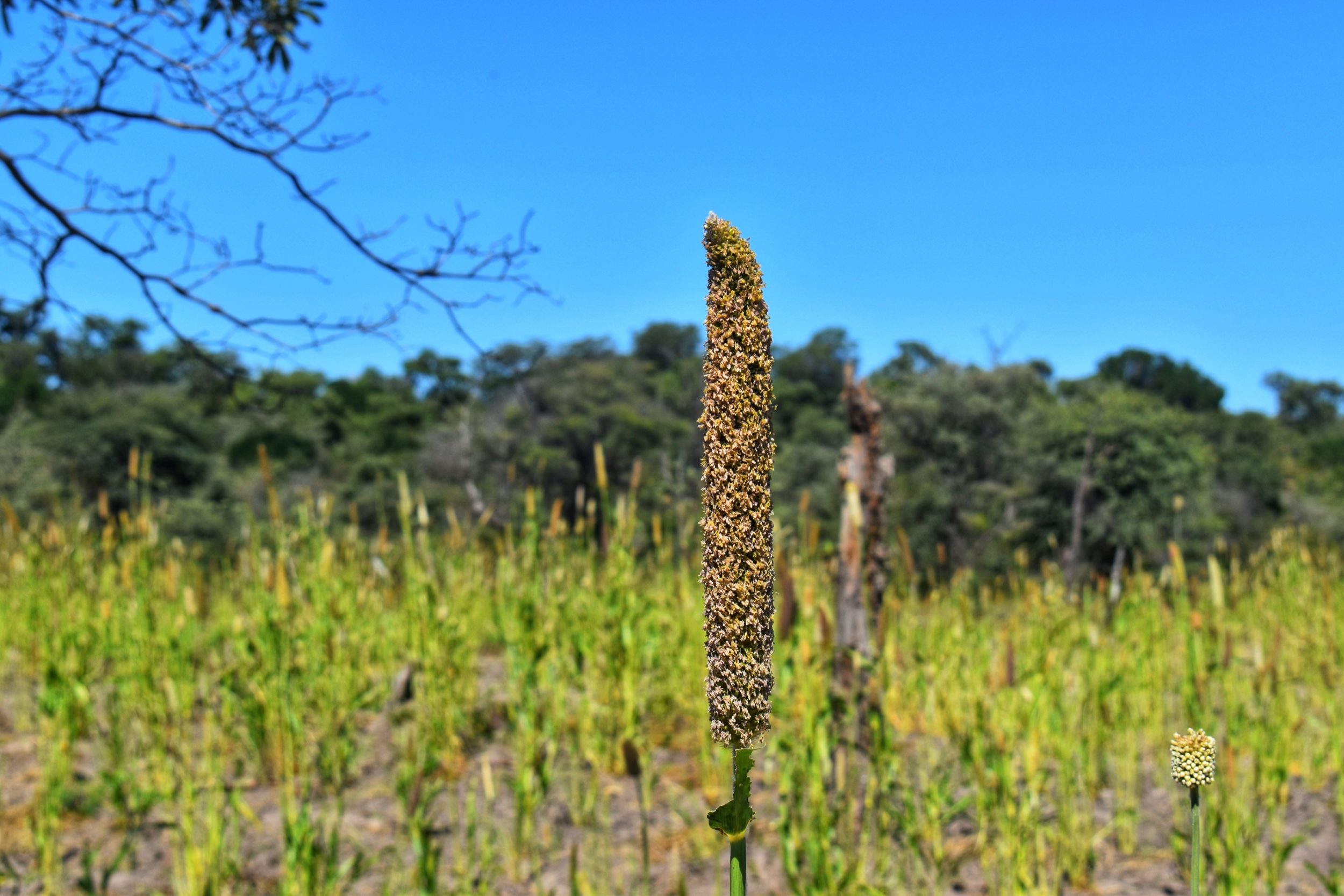 Thousands of crops in northern Namibia are under threat from locust swarms. Photo: FAO/Phillipus Tobias

So far, the outbreaks have cost the Namibian government N$30 million (R30 million), indicating it would need an additional N$28 million to curb the outbreak.

The African migratory locust swarms are currently wreaking havoc in Namibia, Zambia, Botswana and Zimbabwe, and have spilled over into neighbouring Angola and South Africa.

Namibia has red and brown locusts that damage crops.

One of South Africa’s agricultural hubs, the North West, is battling a brown locust outbreak. Swarms were spread from the Northern Cape due to strong winds.

In one day, a locust can eat its own weight. A large swarm usually contains around 40 million locusts and able to span one square kilometre. This can be as much food as meant to feed 35,000 people. Although not new, factors such as climate change, which spurs on extreme weather conditions, exacerbates the rate at which locust swarms gather and destroy crops.

Small-scale subsistence farmers suffer the most when locust outbreaks occur. However, the country is at risk of national food security when locust swarms enter agricultural regions such as the Free State and North West.

Climate change: Removing CO2 from the air no longer optional
1 week ago
1 week ago
PREMIUM!

Climate change: Removing CO2 from the air no longer optional
1 week ago
1 week ago
PREMIUM!