It can't be coincidental that Malema, Zuma and his daughter - who shared a cup of tea two weeks ago - have come out in the same week to speak uniformly about SA's judges. 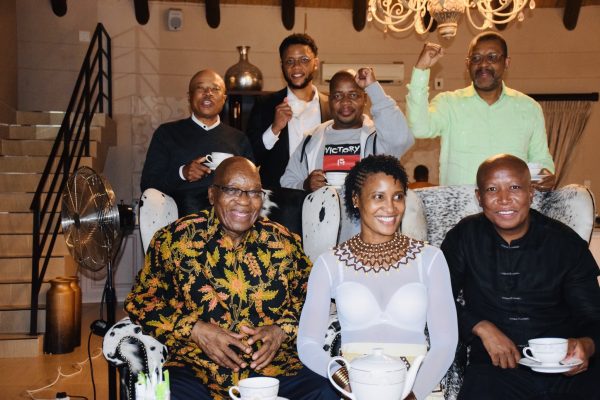 Do you know Christopher Hitchens? He was a controversial, prolific author and journalist, born in the UK. He died of cancer in 2011.

If you know him then you probably know of his “razor”. And no, not the razor that one would use to shave a beard or slit someone’s throat.

It comes from one of his famous works, titled God Is Not Great: How Religion Poisons Everything.

Essentially, if you accuse me of a misdeed, the onus falls on you – my accuser – to prove your claim. I do not have to disprove what has not been proven.

ALSO READ: Malema and Zuma working together to stay in politics and out of jail

The past week, I was reminded of his razor when former president Jacob Zuma’s daughter’s, Dudu Zuma-Sambudla, said on Twitter that our judiciary needed to be investigated, piggybacking off the remarks her father made last Monday when he again shirked appearing before the Commission of Inquiry into Allegations of State Capture.

Zuma-Sambudla tweeted on Friday that the judiciary needed to be investigated, advocating for the release of President Cyril Ramaphosa’s ANC presidency campaign bank statements. 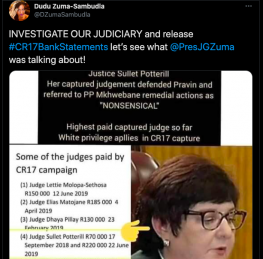 During the parliamentary debate on Ramaphosa’s “insane” State of the Nation Address (Sona) on Tuesday, Malema also cast aspersions upon our judiciary.

“We cannot continue to bury our heads in the sand against growing and now believable allegations that some prominent members of the judiciary are on the payroll of the white capitalist establishment.

“If they continue to think they are the law and not the interpreters of the law, then the people will rise against such few judges who have made themselves the law and are conspiring with politicians,” Malema said in a series of stinging rebukes.

Malema was speaking against South Africa’s judiciary the day after Zuma did something similar.

It cannot be coincidental that both men, who shared a cup of tea two weeks ago, have come out in the same week to essentially speak uniformly about South Africa’s judges.

And by the way, Zuma’s daughter was also at that tea meeting.

Back to Hitchens’s razor.

Now is the time for all South Africans to unsheathe it. Our judiciary has been the lodestar among our three branches of government.

And until there’s actual proof from the Zumas and Malema about impropriety, we must ignore their claims.

I’m reminded of another epistemological device, known as Brandolini’s law.

“The amount of energy needed to refute bullsh*t is an order of magnitude larger than to produce it.”