The EFF commander-in-chief slammed those who believe white South Africans face a 'white genocide,' saying that if anything Trump should focus on what he termed a 'black genocide'. 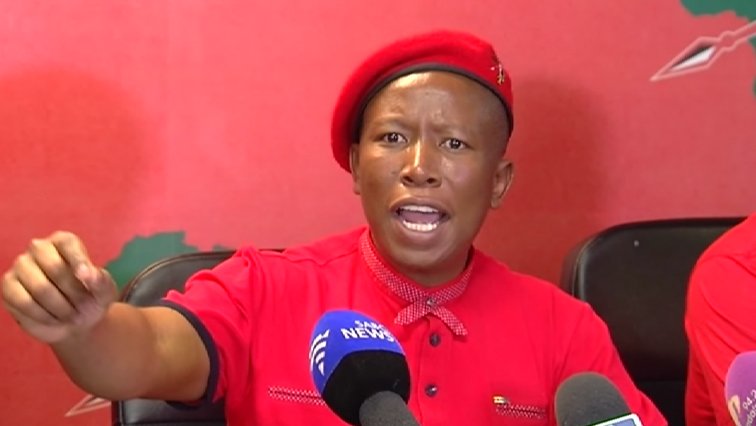 At a media briefing on Thursday at EFF headquarters in Braamfontein, EFF Leader Julius Malema made the shocking claim that a group of right-wing extremists is being trained to kill black people.

“They will kill us for that. There’s a group of white right-wingers who are being trained by Jews in Pretoria to be snipers,” he said.

Whether or not the EFF leader has any solid evidence of this is unclear at this point.

The EFF leader spoke out against the use of the term “the white genocide” used by some on the far right.

Instead, Malema says, it is actually a “black genocide” that is taking place in the US and South Africa.

At the briefing, aimed at providing clarity over the party’s land policy, Malema was in fine form, accusing the DA and ANC of being similar to Afriforum and issuing a stern warning to US president Donald Trump not to get involved in South African affairs. Malema also called Trump a “pathological liar”.

Speaking about his belief that a farm in Pretoria is being used to train snipers to hunt down black people, Malema described a war between those who support expropriation without compensation and those who oppose it.

Malema claims plans to sabotage the EFF’s proposed action on land come not only from AfriForum, but from the DA and ANC as well.

Malema demonstratively declared, “We must put it on record, unequivocally … Donald “the pathological liar” Trump, we are not scared of you and your USA or Western imperialist forces”.

“We are warning you, do not play public opinion games with the land question. It is an emotive issue in which people’s dignity is at stake, our people’s hopes cannot be subjected to a contest on public opinion,” he said.

“We want to send a strong message to the USA authorities, just like we did to the Australian authorities, stay out of South Africa’s domestic affairs,” he continued.

Early on Thursday morning, US president Donald Trump took to Twitter, saying that he plans to “closely study the South Africa land and farm seizures and expropriations and the large-scale killing of farmers.”

NOTE: This article has been updated to reflect that Malema was speaking of snipers being trained to kill black people in general, rather than members of the EFF as was originally reported.

Election fever signals circus between the DA, ANC and EFF
2 days ago
2 days ago

Elections 2021: Like the ANC, EFF needs to drop 'anti-white rhetoric' - analyst
4 days ago
4 days ago

Election fever signals circus between the DA, ANC and EFF
2 days ago
2 days ago

Elections 2021: Like the ANC, EFF needs to drop 'anti-white rhetoric' - analyst
4 days ago
4 days ago