Trust us on land, Mabuza urges farmers at Limpopo summit

Mabuza also addressed the ongoing concern of land grabs, assuring the farmers that the government was against illegal land occupation. 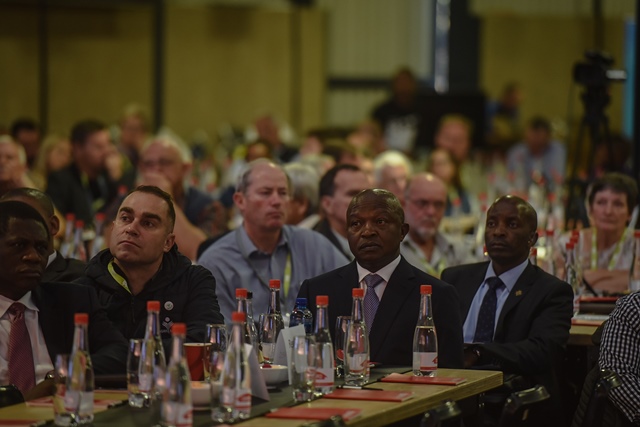 Deputy President David Mabuza, centre, at the Wildswinkel’s auction venue in Bela-Bela during Landbou Weekblad and Agri SA's land summit where farmers across the board can converse with each other, 23 August 2018, Limpopo. Picture: Jacques Nelles

The ANC and government are urging farmers and the agricultural sector to trust the land redistribution process, as they will ensure land reform measures do not result in economic fractures and polarise the country racially.

This was the message by Deputy President David Mabuza to hundreds of farm owners and organisations yesterday, when he joined the discussion on land reform on a farm in Bela-Bela. The two-day land summit, which kicked off yesterday, was hosted by agricultural publication Landbou Weekblad and AgriSA.

Mabuza addressed the ongoing concern of land grabs, assuring the farmers that the ANC-led government was against illegal land occupation.

He said land redistribution would be done within the confines of the constitutional framework. “As the ANC, we will not condone land grab processes that undermine the economy and the sector that is important in our livelihood. We will stand up as a government to oppose land grabs.

“We are going to strengthen our hand to curb this bad behaviour of just grabbing land where you find it empty,” he told the farmers.

Government will first prioritise land under the state’s ownership, including unused and under-utilised state land, to ensure it is used productively. This land will aim at agricultural production, industrial, human settlement as well as economic and industrial development.

Mabuza said land owned by absent farmers will also be transferred to those who will make use of it.

“As we continue with our work, we will broaden participation and collaboration with other economic sectors that impact on agriculture and the entire value chain. One of these key sectors is mining.

“I have already started a process of engagement with the mining houses to make sure that land owned by mines which is no longer available for mining is rehabilitated for agricultural use.”

The summit was attended by farmers, agri-businesses and experts who shared success stories on their efforts to tackle transformation and plans that both black and white farmers have already made on land reform.

Rural development and land reform Minister Maite Nkoana-Mashabane said South Africa needed to be united to solve its own problems on land reform.

“This is our land. Only South African solutions on land reform will work in South Africa,” she said.