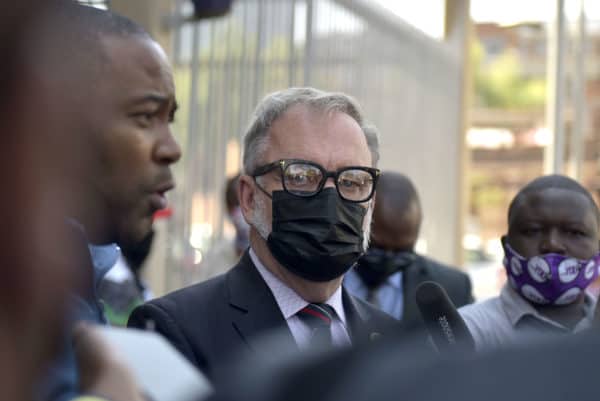 Outspoken ANC member Carl Niehaus has written a letter of demand to the governing party, telling it to honour its liabilities within 10 days or he will institute legal proceedings to declare the ANC insolvent.

This is due to the party’s failure to pay staff salaries on time and their Unemployment Insurance Fund (UIF), provident fund and tax deductions to authorities.

The Commission of Inquiry into Allegations of State Capture has rubbished claims by former prisons boss Arthur Fraser that he was never given a chance to give evidence before the commission.

In a letter addressed to the panel chaired by former Judge of the International Court of Justice Navi Pillay, on Tuesday, Fraser accused the commission of denying him the opportunity to give evidence, defend himself against witnesses who had implicated him and cross-examine witnesses at the commission.

He claimed people who had been implicated in less serious crimes were given the opportunity to testify.

The country’s steelworkers will return to shop floors after the National Union of Metalworkers of South Africa (Numsa) settled on a six percent increase on Thursday.

“It is within this deeper and sober analysis that Numsa’s special NEC convened on Wednesday night and decided to accept the current 6% on minimums, despite our earlier demand that it must be given on actuals,” said Numsa general-secretary Irvin Jim.

The agreement marks the end of the three-week nationwide strike in the engineering sector.

Sars is spying on your social media accounts – Here’s why

Social media is an incredibly rich source of information for anyone, from recruiters and now the South African Revenue Service (Sars) as well.

Crypto assets, the taxation thereof, and the collection of data in the digital age were on the agenda at the recent South African Institute of Taxation (SAIT) Indaba.

Eswatini security forces used live ammunition to break up a pro-democracy protest by nurses, shooting at least 30 of them, their union said on Thursday.

The protest took place on Wednesday, when the kingdom shut down internet access, making it difficult to gather information from across the country. Internet access remained cut off on Thursday.

“Nurses and other workers converged at the Coronation Park were met with unprecedented show of force by the police and the army,” the Swaziland Democratic Nurses Union said in a statement.

A teenager who allegedly stole his father’s car to go on a joyride on Thursday morning has injured 23 children in the process.

Netcare911 said when they arrived at the scene in KwaMashu, north of Durban, they found a minibus taxi transporting the children and a BMW X3 SUV had crashed.

The ages of the injured children range between 5 and 11, with their injuries ranging from minor to serious.