New model’s features upgraded to make it the safest in the range. 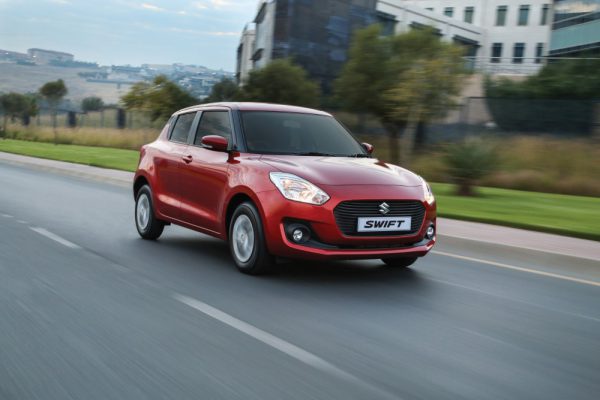 Suzuki has steadily been growing its share of the SA car market, in no small part because of its ever increasing range of well-priced, well-built small cars.

One of their stalwarts has been the Swift and it has been redesigned for 2018. The launch took place at sea-level and the naturally aspirated engine combined with the manual setup provides for quite adequate power and torque, although I generally preferred to change down for overtaking.

There were no AMT versions available at launch, but Suzuki tell us that the gearbox is fitted with a self-actuating clutch and now features a ‘creep’ function to ease the driving load when parking or driving in stop-and-go traffic.

Suzuki has also added a convergent locating system to the five-speed manual gearbox to create a lighter and more precise shift feel.

With fuel prices skyrocketing, consumption is increasingly going to be a factor in the buying decision. Suzuki claim fuel consumption of 4.9 litres per 100 km on the combined cycle, giving it a range of over 750 km on its 37-litre tank.

I could not verify this on the launch drive, but given the good consumption offered by the previous version it seems quite possible given that the new version is a full 95kg lighter than the outgoing model.

The front track has been widened by an equal amount (40 mm) and the rear track is now 35 mm wider, while the wheelbase has been stretched by 20 mm to 2 450 mm.

The new dimensions have allowed the designers to increase interior space, especially for rear passengers and two adults can genuinely occupy this space comfortably, which is not always the case in cars of these dimensions.

Rear passengers now have 23 mm of additional head room, while front occupants benefit the most with 10 mm extra shoulder room.

Behind the occupants, Suzuki has stretched the luggage area to 268 litres. This is a significant improvement of 58 litres over its predecessor and is further benefitted by the fitment of a 60/40 split and foldable rear bench seat on the GL-specification level. For the 2018 model they have added styling elements such as rear door handles in the C-pillar. It has bold vertical headlamps and blacked-out front (A) and centre (B) pillars, which have been further accentuated with a blacked top-section on the rear (C) pillar to create the i mpression of a floating roof.

At the rear, the luggage door has an integrated bulge that rounds off the shoulder line, while an additional high-level LED stop lamp is integrated into the discreet roof-spoiler.

From the outside, the highspec GL-models can be distinguished from the GA-specification level by its wheel cover
design, colour-coded side mirrors with integrated turn signals and the addition of front fog lights.

All versions of the new Suzuki Swift are equipped with air conditioning, front and rear electric windows, power steering and remote central locking. They also have a tilt-adjustable steering column, a detailed information display that includes information such as fuel consumption, and a security alarm and immobiliser.

On the GL-models, Suzuki adds an audio system with Bluetooth-connectivity and USB socket, and steering wheel controls for the audio system. All versions of the new Swift have ample storage spaces in the cabin, including two front and one rear cup holder, side door pockets, a console tray box, and a passenger seat pocket.

It was designed to integrate active and passive safety systems, including the two front-occupant airbags, ABS brakes with electronic brakeforce distribution (EBD) and ISOFIX seat anchors, for the safest Swift to date.

The GL-model adds colour-coded side mirrors, front fog lamps, a audio system with steering-mounted controls and a rear luggage cover.

It is available with the choice of 5-speed manual or 5-speed AMT gearbox.

All models are sold with Suzuki’s warranty and service plan.