'There is a white man here, it's for the second time, last season he did it and I kept quiet,' says Komphela. 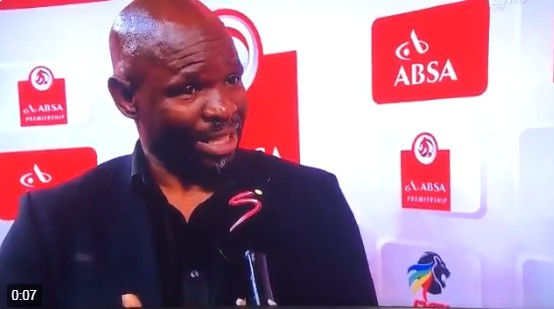 A video of angry Steve Komphela has emerged and now Police Minister Fikile Mbalula wants to take action against whoever drove him to that state.

In the video, Carol Tshabalala interviews the angry Kaizer Chiefs coach after a match, where he slates a “mlungu” who he says has been disrespectful to him.

Komphela proves to us that emotions are best expressed in one’s mother tongue as he drops his sophisticated to express his anger.

Tshabalala asks Komphela what he has to say about the game, and in IsiXhosa, Komphela says: “Carol, I was raised well, I respect people and I’m not disrespectful. But I also don’t like to be disrespected by someone. There is a white man here, it’s for the second time, last season he did it and I kept quiet.

It was unclear who Komphela was talking about, but Mbalula says he wants the “mlungu” to be identified so he can be arrested.

Chiefs was denied a win by Bidvest Wits at the FNB Stadium on Saturday evening.