Three videos have been trending on social media of students refusing to write a philosophy exam, saying it is too difficult to complete. The authenticity of the videos is being investigated by the university. 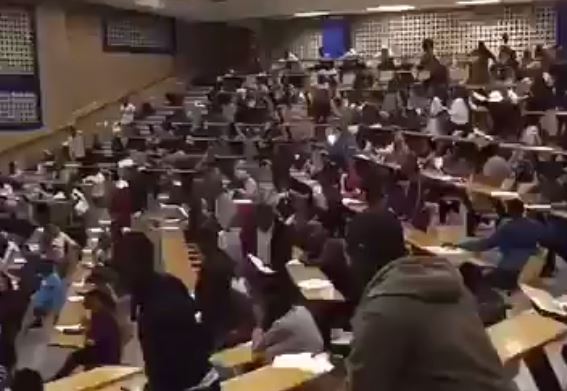 A screenshot of one of the videos trending on social media

Three videos have been trending on social media in which hundreds of students can be seen leaving a lecture hall after they described the philosophy exam they were supposed to be writing as “difficult”, reports Polokwane Review.

University of Limpopo students refuse to write the test saying, that it's too difficult, this country is???????? pic.twitter.com/T8vimfE0E1

ALSO READ: Masutha to help with pardons for Fees Must Fall activists

According to the spokesperson for the university, Johannes Selepe, they still investigating whether the video is genuine or not.

“We will give official comment once we establish whether the video is genuine or not,” he told Bosveld Review.

The three videos have since gained over 12 000 views and have sparked various conversations on the matter on Twitter, with some users applauding the students and others condemning them, saying their actions are a “disgrace”.

expel all those university of limpopo students. bastards.

Students walking out of the exam center because the test was allegedly "too difficult" is a disgrace. The reputational damage to (the institution itself and) everyone who acquires a qualification from the University of Limpopo will be colossal.