According to Shaun Holland, founder of motoring and car spinning website skidmarks.co.za, cars that have traction control are not meant for spinning. 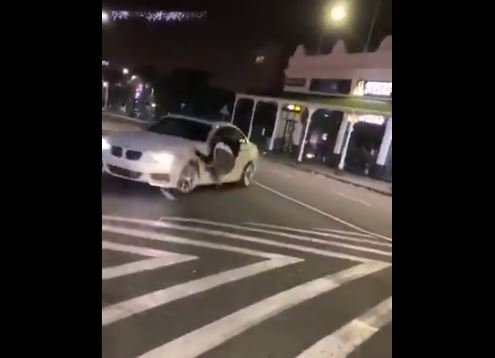 Reckless street spinning turned sour in Durban when a driver knocked down his friend live on camera.

The incident is reported to have taken place in Durban’s Florida Road over the weekend.

Details of the incident remain sketchy.

Giving new meaning to the phrase, “when life knocks you down…”

A man was knocked down by his friend who had been spinning his vehicle on Durban’s popular #FloridaRoad. The incident is believed to have happened at the weekend. No further information is available.

In the video, a BMW with no number plate can be seen spinning while a man is walking towards it. While turned to the camera, the car knocked him over.

According to Shaun Holland, founder of motoring and car spinning website skidmarks.co.za, cars that have traction control are not meant for spinning.

“This is very reckless and we don’t support street spinning. It’s always nice to see until someone gets hurt. This is why promoters have legal events where there are paramedics and a safe place to spin.”