The worsening financial situation is captured by the fact that out of the 257 municipalities across the country, only 27 received clean audits. 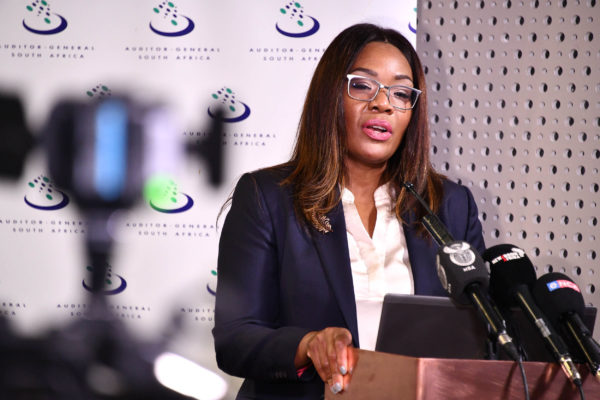 The case of a Eastern Cape municipality which spent Covid-19 funds on a new vehicle for its mayor illustrates the financial chaos that engulfs South Africa’s municipalities.

This according to Auditor-General (AG) Tsakani Maluleke, who said local government finances were under pressure, reporting R26 billion in irregular expenditure at municipalities in the 2019-’20 financial year.

She said municipalities relied on short-term and costly solutions such as consultants to compensate for the lack of financial management and reporting skills, while supervision and monitoring were not taking place.

In the Eastern Cape, Maluleke reported that while there has been an improvement in outcomes, it might not be sustainable due to poor control environments.

“Once again, procurement was a problem,” she said, adding: “There were instances [where] relief funding was used for something other than Covid-19. An example of this is a municipality in the Eastern Cape where the funds were used to buy the mayor a car rather than this intended purpose.”

The details of the municipality in question were not revealed.

On the Free State, Maluleke said accountability can be realised through a decisive leadership tone.

“Lack of accountability creates a perpetual disrespect for regulations, resulting in mismanagement of resources and lack of service delivery,” she said in her report.

She also used the troubled Maluti-A-Phofung municipality, which owes Eskom R5 billion, as an example.

The province has 11 municipalities with qualified audit reports with findings.

Seven municipalities in Gauteng were also given unqualified audit reports with findings.

She said the provincial government needed to upscale the implementation of preventative controls and drive consistent consequence management.

Maluleke said there was a need for leadership to act on accountability to bring about the desired change.

Nine municipalities’ audits were outstanding, while only three were awarded unqualified audit reports with no findings.

“The state of internal controls, coupled with lack of consequences for transgressions and weakened oversight, is at the centre of the deteriorating accountability in our local government,” Maluleke said.

“Sustainable change starts with leadership’s will to drive it. The benefits derived from implementing preventative controls are evident, but there is still a lot to be done to address undesirable audit outcomes,” she said.

Maluleke said to bring about accountability, leadership must be aligned and actively lead.

She said there was total neglect of internal control disciplines, resulting in financial and operational collapse, weakened governance and a lack of accountability.

Maluleke said the province remains consistent with its sound financial management, but she raised concerns about the inadequate preventative controls on compliance despite good financial accounting controls.