WATCH: When things get tough, Zizi Kodwa turns into Komphela

Kodwa could not find words in the English language to express his views, so he turned to Latin. 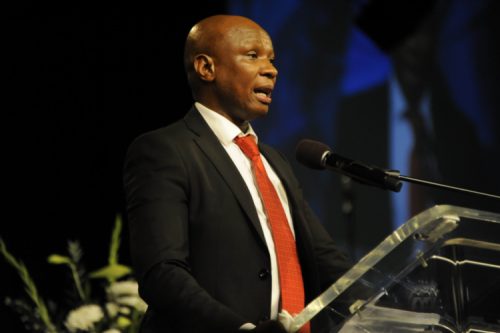 It is safe to say ANC spokesperson Zizi Kodwa has the toughest job in SA politics, as the ruling party always has some crisis to sort out, and it’s his job to communicate the party’s stance and intentions to the masses.

The ruling party recently suffered a blow after the Supreme Court of Appeal (SCA) in Bloemfontein dismissed the appeal by President Jacob Zuma and the National Prosecuting Authority (NPA) in the spy tapes saga.

Justice Eric Leach had granted Zuma and the NPA leave to appeal, but the appeal was dismissed with costs. This means the NPA should immediately reinstate charges of fraud and corruption against Zuma.

Obviously, South Africans would want to know how the ruling party was dealing with the mess, and it had to be Kodwa doing what he does best, only that this time, it’s a bit difficult to understand what he said. Perhaps Kaizer Chiefs coach Steve Komphela could help us, as it sounds like something he would say.

In an interview with eNCA, Kodwa said:

Must Watch: Zizi Kodwa’s reaction to the Supreme Court Case outcome on #SpyTapes 😂😂

Some social media users seem to have understood him, though most were still waiting for an explanation.

“Why people can’t just speak simple English for everyone to understand what they are saying? He is trying to be fancy and it’s not working.”

“Audi Alterum Petum is a Latin word meaning ‘both sides must he given an opportunity to present their case or be heard.People are laughing cause they don’t understand.He even said “there must be fairness’ but people ignored because they selectively listened to him.”

“When you get to a stage where you really can’t defend Duduzane’s father, you bring out the heavy artillery from your vocabulary.”

“Yhoo, Zizi is talking Latin now my ears are so itching now, needs some an earbud.”

“Can somebody please interpret the entire phrase not only the ‘audi alteram partem’ part….I need to upgrade my English, I thought I knew it better but it doesn’t seem like it.”