WATCH: Mbalula called an April fool as he speaks to hundreds of people at taxi rank

Viewers called out the lack of social distancing and use of personal protective equipment by the crowd of taxi drivers and owners who had gathered to listen to the minister in evident violation of lockdown restrictions. 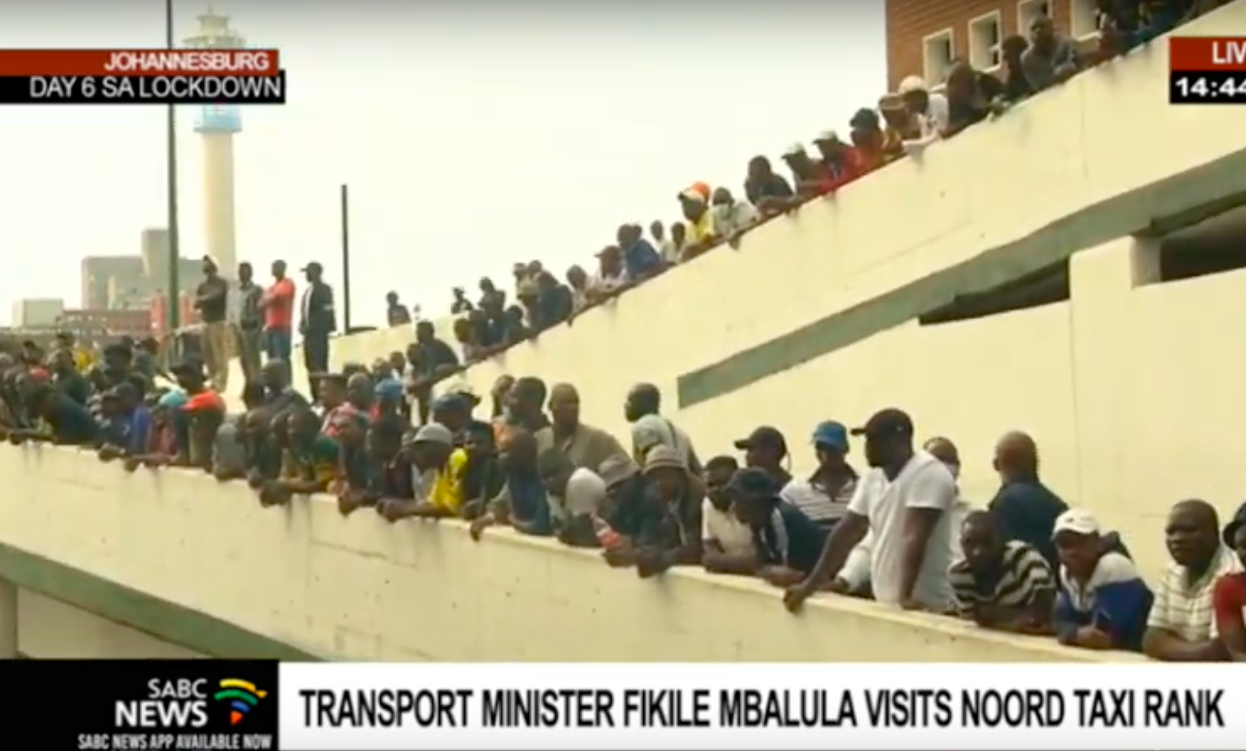 Following his meeting with the South African National Taxi Council (Santaco) on Tuesday after they threatened a nationwide strike over the lockdown regulations, Transport Minister Fikile Mbalula addressed taxi drivers and owners on the changes to taxi operating times and passenger numbers in an effort to avert the strike.

Speaking at the Noord taxi rank in the Johannesburg CBD on Wednesday, Mbalula said his department had conducted an assessment of previous measures and consulted with the taxi industry on ways to better them.

“The consultation process also included relevant structures within government and individual ministers. In consulting with the taxi industry, I have engaged the leadership of Santaco and the National Taxi Alliance (NTA). I must commend the taxi industry for their efforts and commitment to playing their part in enabling mobility of the poor,” said Mbalula. “During the lockdown period, all minibus and midibus taxi vehicles will be permitted to load their maximum 100% passenger loading capacity as provided for in their operating licenses, provided that all passengers are wearing surgical masks or N95 respiratory masks provided by government.”

He further explained to the crowd how the previously proposed measures were all about saving lives and stopping the spread of Covid-19 in the country.

However, he was criticised on social media for the volume of people in the crowd he was addressing, as it went against the 100-people-per-gathering limit enforced under law during the national state of disaster prior to the current lockdown period.

Social media users did not care that this was done in order to inform key stakeholders. EFF leader Julius Malema was among those retweeting tweets sent in criticism of Mbalula’s move.

Some called the minister an “April fool” too, since Wednesday was 1 April. Mbalula’s middle name also happens to be April, since it is his birth month.

No face mask, no gloves, no social distancing. pic.twitter.com/lCIl0gMULn

Why can't the minister adress the public? Its better to force taxi operators to comply. They wil just have to make a plan or work together with govt. We need to take precaution because people DO still use taxi . SO # HAVING MASK IN TAXI IS GOOD IDEA.✌????peace out

He failed to announce his "Breaking News" from his residence or office? ???? Bo_Mbaks ka meriri e mesweu for nothing, bana mo tlhaloganyong.

Why is Mbalula holding a gathering in Noord Taxi Rank? ????

@ThabisoTema #PowerDrive afternoon T.T am watching the briefing by minister mbalula AKA mbaks,why did he have to go to Noord taxi rank?i mean this social distance thing is not going to work he could have had this briefing in his office or hall and invite few media people ????????

Watch the full address below: