The truck driver seemed oblivious to the frantic attempts to get him to stop. 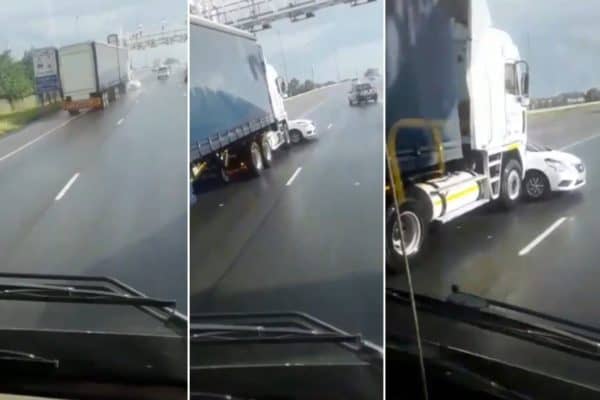 A video on social media shows a car being pushed sideways by a heavy truck on the N12 highway in Johannesburg. Picture: Twitter/@rsa_trucker

Shocking footage on social media shows a helpless driver of a sedan being pushed sideways by a heavy truck on the N12 highway in Johannesburg.

The video was uploaded on social media by SA Truckers.

The footage shows the occupants of what seems like a bus frantically trying to get the attention of the driver of the heavy truck. Their desperate attempts, however, don’t work. Passengers start shouting at the truck driver to get him to stop. Other motorists can also be heard hooting.

A brave man in a bakkie then speeds ahead of the truck, gets out of his car and tries to flag down the driver. His efforts are also ineffective and the man, who seems to be a security guard, has to jump back into his bakkie and drive away to avoid being driven into as well.

While there are no details of the incident at the time of publishing, the driver of the truck seems unaware that he is pushing a car along the highway. The person inside the car also seems to be unable to get out of the perilous situation. The weather conditions probably didn’t help either – the road is wet, making the situation more dangerous.

Although the footage shows the car being pushed by the truck for hundreds of metres, it is not clear how the vehicle ended up in front of the truck, or how the terrifying incident ends.