WATCH: Thief flees in tractor after botched robbery of motorbikes in Australia

The man used the tractor to smash into the store and then attached two motorbikes to it. 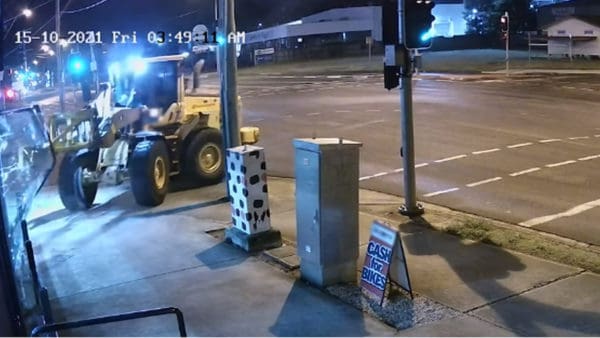 The thief used a tractor to smash a motorbike store's window in Ipswich, west of Brisbane. Photo: Screenshot

A thief in a tractor has led police on a destructive chase through suburban streets and onto train lines in Australia, after allegedly stealing motorbikes from a shopfront.

Queensland Police released dramatic footage of the moment a farm vehicle ploughed into a motorbike store’s window early on Friday morning in Ipswich, west of Brisbane.

According to police, the driver then got out of the cabin and attached two motorbikes to a boom on the front of the vehicle before driving off.

But as the tractor attempted to flee police vehicles, the boom and the two bikes were dropped onto the road.

The tractor then hurtled along roads and damaged fences before crashing through a gate onto a rail line while police followed.

Trains were stopped as the vehicle fled along the railway, cut through bushland and backyards before eventually sliding into a tree.

The man then ran away but was tracked and arrested by police in the long grass of a creek.

The 41-year-old was charged with several offences, including the dangerous operation of a motor vehicle and evading police.

No one was injured in the incident.