The sexiest Rolls Royce yet

It’s impossible to make an objective judgment about a Rolls Royce Dawn. What do you say about an R11-million plus motor car? Rolls Royce say that the new Rolls Royce Dawn is the “sexiest Rolls Royce ever built”.

Well they were hardly likely to say they did better last time round, but it is a very beautiful motor car. At its heart is Rolls Royce’s twin-turbo 6.6-litre V12 engine which produces 420kW and 780Nm, making it their most powerful full four-seat drophead motor car to date, and that is beauty that can’t be disputed. 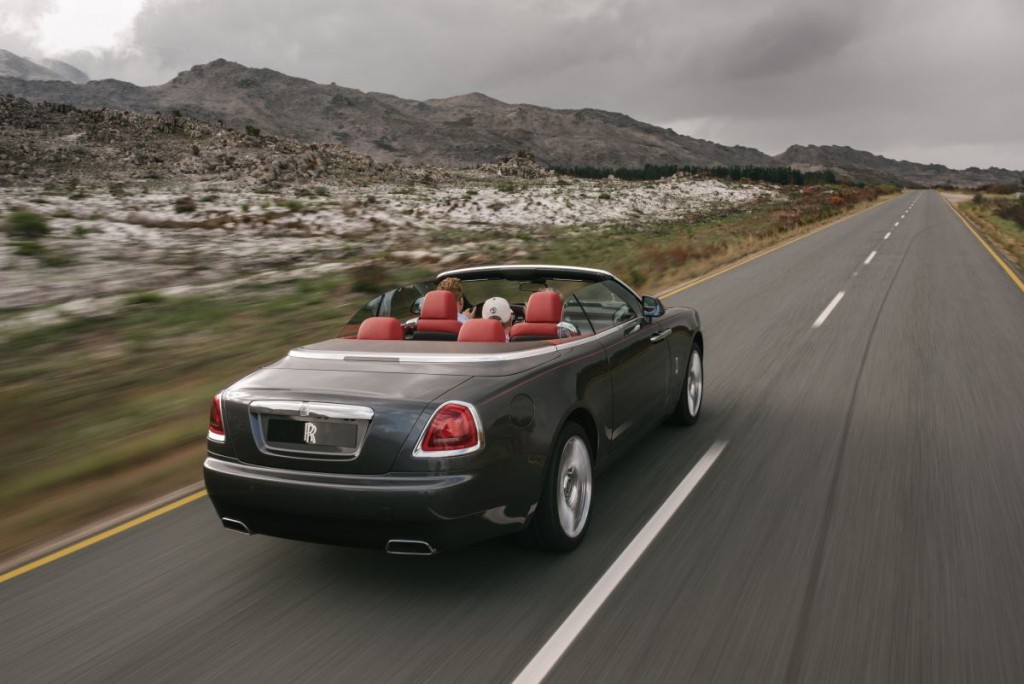 In this regard the ride is the best I have ever experienced. Rolls Royce launched its first Dawn models in the 1950s a time which heralded a new dawn for the world as it shrugged off the horrors of World War II and its aftermath.

The new Dawn is perhaps something of a new beginning for Rolls itself. Its customers age profile has dropped from an average age of 52 to just 44. Try not to be too harsh on yourself if you don’t fit the profile, there are only a couple of thousand such people on the whole planet. Just a tiny fraction of the 1%.

This movement to include a younger owner allows the Dawn to come across as being ultra-exclusive without being stuffy. It is spacious without being overly voluminous. It is a genuine four-seater which would allow for the social set to travel in style without being cramped into conventional 2+2 configuration. 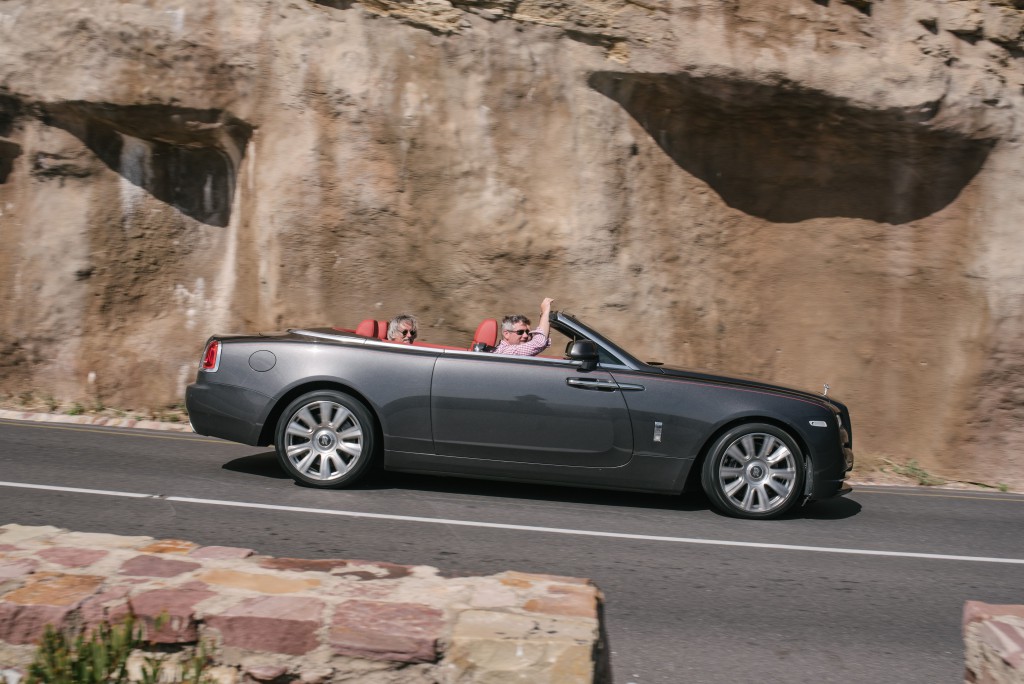 One of the most outstanding features of the Dawn is the folding roof. Engineering has met aesthetics in allowing the edge of the roof to curl down over the side of the Dawn and wrap around the rear seats. It creates a line that allows the Dawn to look truly good with the roof up.

It is that lateral curve that changes everything for the designer – and stretches the engineer. Another point to note is the small size of the rear glass – a carefully-judged proportion which heightens the sense of a private sanctuary when motoring with the roof up. 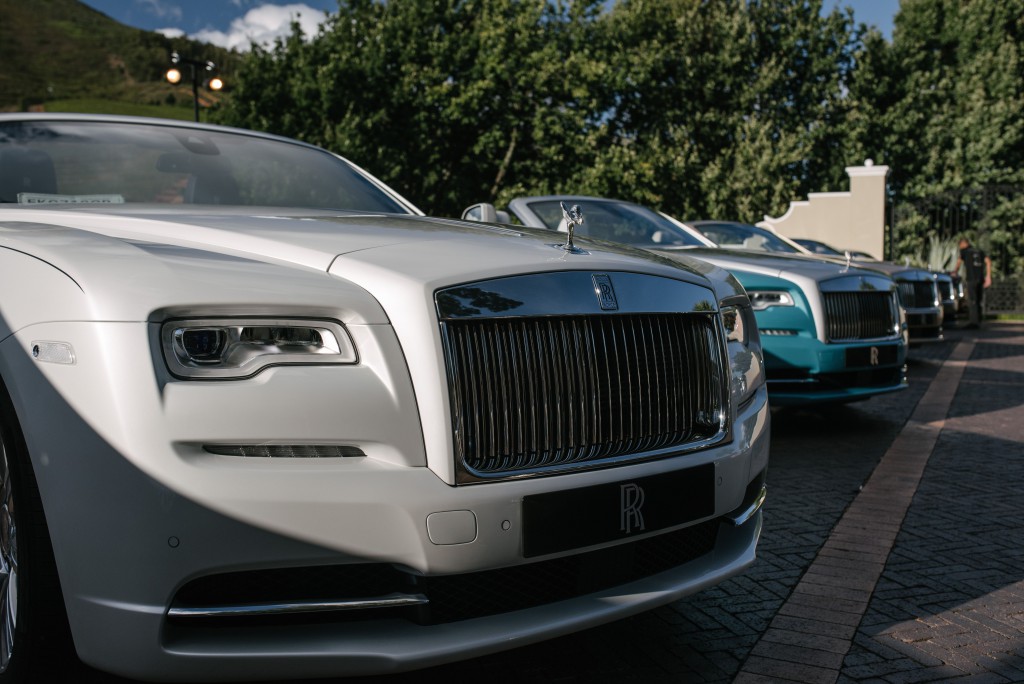 The top opens and closes silently at up to 50Km/h and in 22 seconds transforms the vehicle in each instance. The Dawn is two cars in one. Two key techniques were employed to ensure the roof not only works aesthetically, but also contributes to the silence of the car in its function.

A perfectly smooth surface, combined with an innovative tailored ‘French Seam’ ensures that the air flow over the car with the roof up creates no noticeable wind noise.

Inside, the Rolls-Royce Dawn is as silent as a Rolls-Royce Wraith. The interior itself is an amazing work of modern craftsmanship. Clothed in open-pore Canadel panelling that traces the horse-shoe shape of the rear cabin, it demonstrates the great advances that the craftspeople in the Woodshop at the Home of Rolls-Royce in Goodwood have made in wood crafting technology and techniques.

The wood on the deck, chosen by the customer to suit their individual taste, flows down the ‘Waterfall’ between the rear seats, and around the cabin, clothing the interior door panels.

The Dawn features RollsRoyce’s unique coach doors. Doors that open the other way round so to speak, like giant suicide doors. They add considerably to the easy entry and egress of rear passengers from the Dawn. 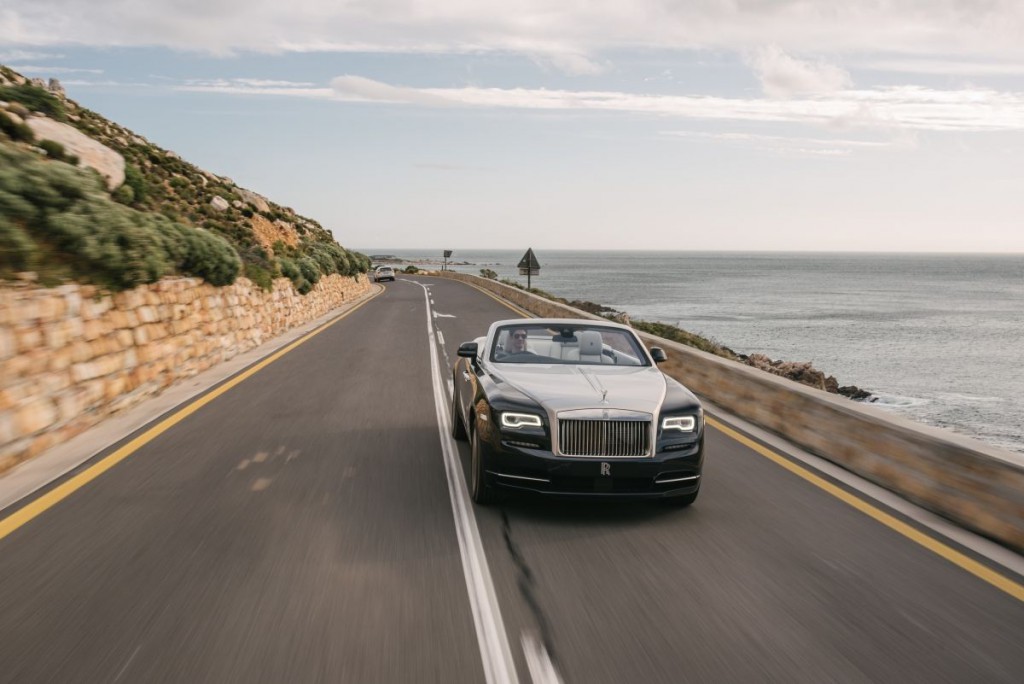 The Rolls-Royce Dawn offers four very individual, cosseting seats. The vehicle is a full four seater and so there is no compromise in comfort wherever you sit.

The instrument dials have also undergone subtle enhancements with individually applied polished metal chaplets around the dials evoking the precision design of hand-made, luxury wrist watches, whilst the matt chrome centres ‘float’ in the middle of each instrument.

In addition, a new clock design featuring the new motor car’s name has been introduced. Sixteen individually-tuned speakers, with both theatre and studio settings, deliver a pure ‘larger than live’ sensation.

The technology complements this, with frequency and phase correction for individual speakers eliminating potential loud and dead spots caused by outside influences.

Grip is provided by runflat tyres, metrically sized at 540mm (20 inches) in diameter. These tyres enable the Dawn to run on a deflated tyre for at least 160km at speeds up to 80km/h before needing a replacement. 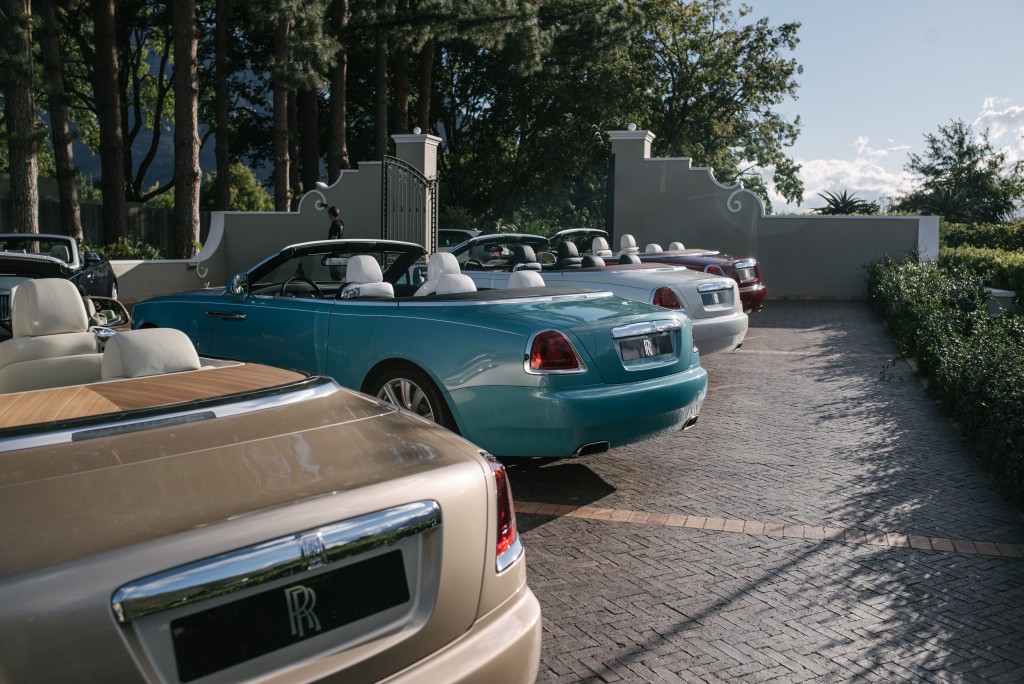 A remarkable level of control still exists, even with a tyre fully deflated. Optional 21” wheels are also available, mounted on 10-spoke rims. The inclusion of runflat tyre technology removes the need for a spare wheel and jack, freeing up space in the luggage compartment.

This Spirit of Ecstasy Rotary Controller presents a touch pad (rather than a touch screen which might leave unsightly fingerprints at driver and passenger eye level), with the ability to write characters by finger, as well as the ability to scroll through function menus by turning the chrome dial and pressing down to select its functions.

The Rotary Controller’s touch pad also allows ‘pull and pinch’ features, replicating intuitive smart phone functionality. These help the user pinpoint areas on the screen or make them larger. In an accident, the Dawn will deploy a concealed roll-over protection system from behind the rear head restraints in just a fraction of a second.

A ratchet system then locks them in place. This rollover protection system also encompasses the entire windscreen surround of the car.

The Rolls-Royce Dawn’s smoothness is everywhere and the transmission is aided by Satellite Aided Transmission which utilises GPS data to allow the car to see beyond what the driver sees, anticipating their next move based on location and driving style.

It uses this information to select the most appropriate gear from the Dawn’s 8-speed ZF gearbox. The most recent developments in LED lighting technology have also been applied to the RollsRoyce Dawn.

It is impossible to make an objective judgment about value in a Rolls Royce Dawn, that’s sort of the point.

So given that it is expected to sell here for between R11-million and R12-million stroke your own ego and decide if you are worth it.