These are Muthambi’s pearls of wisdom from ‘hypocritical’ budget speech

Despite allegedly flying 30 guests who had nothing to do with official work to attend her speech, she told civil servants to not do exactly what she was doing. 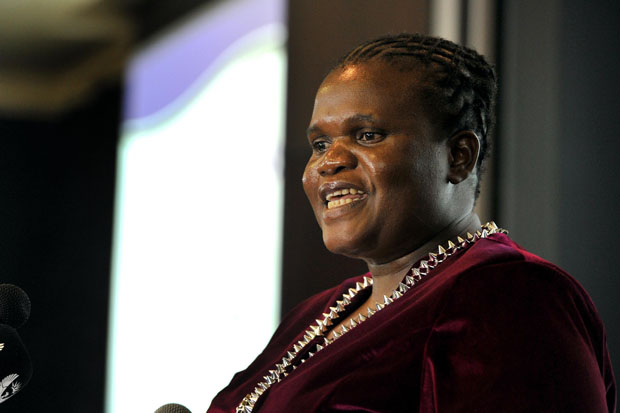 This is because as part of the ‘disgraced’ minister’s portfolio oversight, Muthambi is tasked with ensuring that recruitment processes in the public sector are beyond reproach. The media reports claimed she had done nothing but contravene them.

The Sunday Times reported she employed axed SABC COO Hlaudi Motsoeneng’s daughter. She also allegedly hired a police constable, apparently a fellow comrade without a matric qualification, as her personal assistant to the tune of R1 million a year.

Motsoeneng said her daughter was “certificated”, while the police constable refused to discuss the matter with the media.

According to the report, R300 000 was spent on 30 guests when they were shuttled from mainly Limpopo to OR Tambo International Airport, and from there flown to Cape Town, where they were booked to unnamed hotels and were treated to some sage words of advice.

Muthambi evidently spoke in forked tongues, asking public servants to adhere to public sector prescripts and strive to be financially prudent in their dealings.

“Honourable members, it is common knowledge that presidents Tambo and Mandela chose a life of selfless service despite the attractions and full potential of a more prosperous and self-centred life. It is this selfless dedication we wish to deepen and promote in the public services of today.”

Despite having packed the parliamentary gallery with 30 close associates, most of whom had apparently nothing to do with her budget speech, Muthambi implored civil servants to uphold the values espoused by the constitution.

“To move us further in that phase, we require a new, innovative, selfless and inspired type of public service, in the mould of OR Tambo, all of which are in line with the principles of the constitution of the Republic to provide [an] effective, transparent, accountable and coherent government,” her speech read in part.

She also fired a strong warning to civil servants found to have contravened public sector regulations: “We view misconduct in a serious light, and will continue to strengthen measures for effective consequence management in the public service.”