‘My f*k Marilize’ cyclist is loving her insta-fame

A 19-year-old woman from Namibia has become something of a meme after she managed to cycle into a rugby post while learning to ride a bicycle. 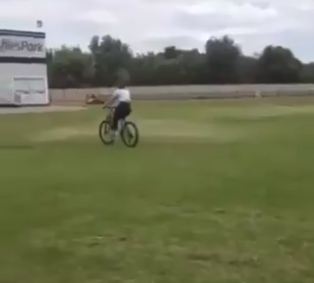 May I have your attention please? Will the real Marelize please stand up? Or did she? @_nick_archibald chats to the girl in the video on 1 March at 07:10! Tune in ???????? #MyFokMarelize pic.twitter.com/RMIxZ2qcy9

The young woman, Marilize Horn, said in a radio interview that people simply couldn’t believe she’d been given a car licence before learning to cycle, but the reality was that she still needs to master the two-wheel art.

The hilarious video ends with her long-suffering mom saying “My f*k Marilize” and running over to check that she’s OK. Apparently she was more concerned about the bicycle than her daughter.

Somehow the accident-prone Marilize found the “only cactus in the desert” to collide with.

Her mom’s catchy phrase has now become easy shorthand in Afrikaans for just about anyone expressing exasperation.

By pure coincidence Marilize was then interviewed by a Stellenbosch student radio station, MFM, whose name just happens to be an abbreviation of “My f*k Marilize”.

You can listen to their chat with her below as well as watch MFM’s “tribute video” to her.

Who is Marelize?!
After a video went viral of a girl cycling into rugby posts we had some fun with our own @marilize_dup #MyFokMarelize pic.twitter.com/uIRU1gOGKd

Marilize, who obviously doesn’t take herself too seriously, has taken all the gentle mockery of her cycling skills in her stride.

CORRECTION: An earlier version of this story featured a picture of a woman who was not connected to the story in any way. We regret the error.