May 21 could be D-Day for Kempton Park squatters

This comes after the granted court order for substitute of service regarding the application for eviction was issued by the South Gauteng High Court on March 20. The metro police kept an eye on proceedings at the informal settlement on Tuesday.

The wheels for the eviction of the Dann Road squatters in Kempton Park are in motion, although a bit slow.

The sheriff served the squatters with an application for eviction documents on Tuesday morning, Kempton Express reports.

This comes after the granted court order for substitute of service regarding the application for eviction was issued by the South Gauteng High Court on March 20.

At the court proceedings, the owner was granted permission to serve the notice of application for the eviction of the squatters in specific ways.

Kempton Express spoke to attorneys Minnie & Du Preez Incorporated, who were requested by the affected community to assist them, to elaborate further on the granted court order and the means by which the notice of application can be served to the squatters.

“We want to clarify that we are not the attorneys for the owner. We were requested by affected residents to assist with the legal processes regarding the Dann Road situation,” said Neville Minnie, director at Minnie & Du Preez Incorporated.

“We continuously followed up on the progress of the owners’ eviction application and placed immense pressure on the owners and their attorneys to start their legal process due to the hugely affected community as a whole. The owners’ attorneys provided us with a copy of the application for the eviction of the illegal occupants on the premises. “The owners’ counsel attended court on March 20 and requested the court to grant them an order to allow the service of this application to be done in specific ways. The court ordered that the owner could serve the application in various ways, which included attaching a copy thereof to each shack or sliding a copy thereof under the door.

“The Sheriff is further ordered to, by way of loudspeakers, inform the occupants of the eviction application. The return date of the application is scheduled to be heard on May 21.”

The order, which was obtained by Kempton Express, directs the Sheriff as to how he is entitled to serve eviction application on the occupants. Part of it reads:

3. The Applicant is permitted and directed to serve (i) the Notice of Motion and the Founding Papers in the main application for eviction; (ii) this Order; and (ii) the aforesaid authorized Section 4(2) notices [collectively “documents”], on the unlawful occupiers … occupying the properties known as Holdings No 27, 32 and 33, Glen Marais, Kempton Park Agricultural Holdings [collectively “properties”] in the following manner:-

3.1. The Sheriff must assign a number to each living unit on the properties that appears to be occupied and indicate the location of such living units in the form of a manuscript map which need not be to scale;

3.2. The Sheriff must establish the name or names of the principal occupier or occupiers of each living unit (as identified in 3.1 above) who are prepared to identify themselves;

3.3 The Sheriff must serve the documents:-

3.3.1. By affixing one copy thereof to the inside of the perimeter fence/wall of the properties;

3.3.2. By serving copies thereof on each principal occupier who has been identified as described in 3.2 above, in the manner set forth in Rule 4(1) of the Uniform Rules of Court; or A razor wire fence was erected around the property a few weeks ago.

Minnie also clarified the reason for the method of service. In terms of the order, “the sheriff is now authorised by court order to serve the application upon the residents. The reason the owners’ attorneys had to obtain direction for service was due to the unknown identity of the people residing on the land. The application must be served in the way the court deemed appropriate, which the owner needs to comply with prior to the return date in May”.

6.3. By announcing with the aid of a loudspeaker and in English at the entrance of each of the properties the following:-

6.3.1. that proceedings for the occupiers’ eviction have been instituted by the developer and owner of the properties, to wit, PJJ van Vuuren Beleggings (Pty) Ltd for an order for the eviction of the unlawful occupiers from the properties;

6.3.2. that the legal proceedings for an order for their eviction will be sought from the High Court of South Africa, Gauteng Local Division (Johannesburg) at Von Brandis Square, Pritchard Street, Johannesburg on Monday, the 21st of May 2018 at 10h00 am.

The squatters are also allowed to oppose the application of eviction.

“The order states that every occupant is entitled to oppose, should they wish to do so. The occupant must oppose and file their reasons for opposing the application within 30 days of receiving the application, where after the matter is scheduled to be heard on May 21,” explained Minnie.

“A further reason for the substitute service is that the owners can now cover their tracks to avoid a defense of occupants that they were unaware of the application, which in itself causes length delays. The Court Order now makes provision for service, even with the identity unknown and further even if the occupants refuse acceptance of the application.

“Therefore, if you are one of the occupants who refuses acceptance of the documents, then the sheriff can place the documents near the shack, for example, and note same as served, therefore the responsibility is no longer on the owner or the sheriff to personal service.

“If the squatters believe that they are rightfully entitled to be on the privately-owned land they should convince the court. We do anticipate some form of opposition on May 21. The court will consider the reasons for opposing prior to granting a final order. The court needs to make an order which is fair and equitable for all parties concerned.”

Minnie also confirmed that the occupants must file their opposing affidavits before the next court date in order to be considered. 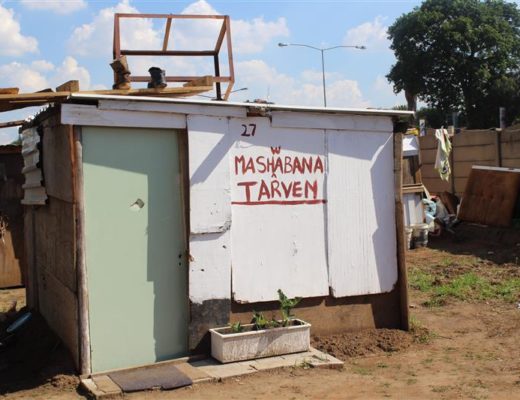 This photograph was taken inside the informal settlement a few months ago.

“The application has specific guidelines whereby it is ordered that, should you wish to oppose the application, you need to file your opposing papers with the court and the land owners’ attorneys within 30 days of receiving the application. The court therefore grants all occupants a fair opportunity.

“The sheriff’s directive in terms of the order is to try and serve as many occupants as possible. What the occupants need to understand is that attempting to avoid service is no ground for not being evicted.

“By trying to avoid receiving documents will only mean that the application will be heard without their objections being heard.”

Minnie added that the community, through a representative forum, would apply to become a party to the proceedings to ensure that once alternative accommodation is found, the community as a whole will benefit.