WATCH: Drunk man takes a nap after crashing his car

The man was arrested for drinking and driving, but not before three traffic officers struggled to get him off the roof. 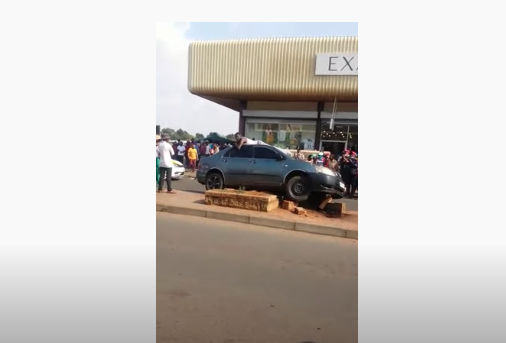 Screengrab of the man who crashed his car, and then settled down for a snooze. Photo: Randfontein Herald/YouTube

For most people, even a minor bumper basher can be traumatic.

But not for a man who crashed his vehicle in Westonaria on Friday afternoon, who was so nonchalant after the incident that his first reaction was to get onto the roof of his car and lie down for a nap.

He was arrested for drinking and driving, but not before three traffic officers struggled to get him off the roof, reported Randfontein Herald.

The man appeared to have crashed in a busy part of town, with passers-by eyeing the strange scene, while trying to escape his blaring car alarm, presumably triggered by the crash.

Kenny Mampondo, chief of the Rand West City traffic department, was shocked at the video of the incident.

He confirmed the arrest and condemned the man’s irresponsible behaviour seen.

“This is not normal behaviour,” Mampondo added.

“This is one of the major problems that we are dealing with ever since lockdown levels have been relaxed. People under the influence get behind the wheel leading to things like,” he said.

This article first appeared in Caxton publication Randfontein Herald and was republished with permission.