Have you seen this blue couch? Save it from being 'stranded outside in the cold'. 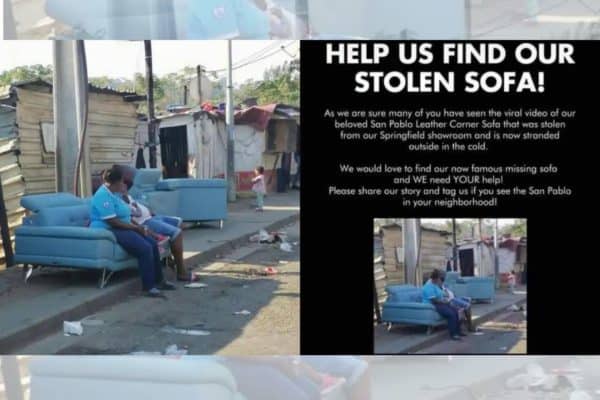 South Africa’s most famous coach – a San Pablo Leather Corner Sofa worth R70,000 which went viral during the unrest and looting sprees of recent weeks – is being hunted down by “social media police”.

Earlier this week, Leather Gallery SA and Sedgars Home called on the public to help locate the stolen couch. The company, which specialises in modern furniture and lifestyle items, launched a social media campaign.

“As we are sure many of you have seen the viral video of our beloved San Pablo Leather Corner Sofa that was stolen from our Springfield showroom and is now stranded outside in the cold.”

“We would love to find our now-famous missing sofa and WE need YOUR help! Please share our story and tag us if you see the San Pablo in your neighbourhood.”

Social media police on the case

Lo and behold, it worked. Netizens began an eager investigation to track down the stranded sofa and rescue it from Johannesburg’s cold snap.

One netizen shared the original photo of the couch on Twitter, asking if anyone recognised the area.

Speaking to TimesLive, Leather Gallery owner Greg Parry said they were overwhelmed with the response received from the public and are “in the process of investigating the information received”.

“We want to take all of the necessary precautions as we understand that the situation is still potentially dangerous and can become volatile at any moment. We would love to retrieve as much of our looted stock as possible.”

That said, Parry added that the company’s top priority remained the safety of their employees and customers, and they “would never want put them in a potentially dangerous environment”.

WATCH: ‘You are just expensive for nothing’

Will Downer be removed? Zuma will only know in October
4 days ago
4 days ago

Will Downer be removed? Zuma will only know in October
4 days ago
4 days ago