Though the first black mamba was relatively easy to catch, the second snake proved to be more elusive. 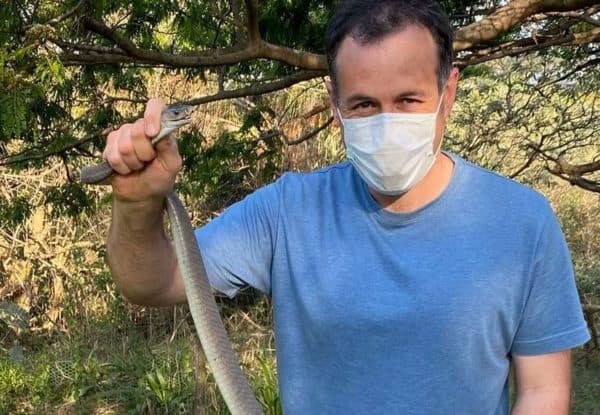 Snake catcher Nick Evans with the first black mamba he caught. It couldn't get through the fence as it had just eaten and its stomach was bulging. Picture: Twitter/@NickEvansKZN

Snake catcher Nick Evans got two “extraordinary” calls on Sunday. He was asked to catch two black mambas at two different houses on the same street in Westville North, Durban.

Evans first got a call to catch a black mamba at a home which borders the Palmiet Nature Reserve. The snake was in the garden and its stomach was bulging after just eating something. The bulge in its stomach meant it couldn’t leave the property as it could no longer get through the fence.

While on his way to this home, Evans got another call about a black mamba that was seen on the deck of a house across the road from the house of the earlier call.

As the mamba on the deck could not be seen anymore, Evans decided to first catch the snake stuck in the fence.

“The mamba was at the bottom of the garden, looking rather tired. I approached slowly, and it lifted its head, probably thinking ,’this isn’t good!’ It tried to get out the fence, but the bulge prevented it from doing so, so I grabbed it with the tongs.”

Evans said when he grabs black mambas with tongs, they reverse, and he is then able to grab the head with his hand.

“This one just would not reverse. It was very annoyed with me, but wouldn’t reverse as per normal. It was most inconvenient! Eventually, though, it gave up, and reversed for me,” he said.

With one snake caught, Evans went across the road to try to find the other one. The snake expert thinks the other black mamba was also hunting dassies. He couldn’t find it, though.

The mamba, however, didn’t move far away. Evans got another call on Monday from a neighbouring property. Two dogs were trying to catch the snake on the fence line.

Although it disappeared again before Evans got to it, the homeowner’s cat found it later that evening and was stalking it. The large mamba then moved across the trees, back to the deck at the neighbours’ house, where it was seen moving under a concrete slab.

Evans returned to the area for a third time, this time in the dark, and luckily found the mamba curled up in a pit under the slab.

“I didn’t feel comfortable doing this alone. The mamba could shoot out at me but it could also shoot out to the left side, and who knows where it would go from there.”

So, Evans asked his friend, Duncan Slabbert, to help him.

To catch the mamba, Evans and Slabbert decided to break the concrete slab with a pick axe. This led to the mamba trying to move away and it crawled between bricks nearby.

“Duncan could see it was actually in the hollow bricks, and tried grabbing it. It popped it’s head out of the side, but as I tried reaching for it, it ducked back in,” said Evans.

Slabbert eventually grabbed the mamba in a hollow brick and pulled it up.

“The head then appeared, gaping at us, telling us it was not impressed,” said Evans.

“I managed to pin the head down at this moment, and we finally had it. Once I had the head, we easily pulled the rest of the body out. It was a beast of a mamba – 2.6m in length.”

NOW READ: Snake season has arrived: Here are the kinds to beware of this spring 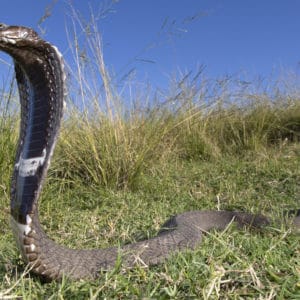