Community members in Evaton West put on their swimsuits and took a dip in the muddy water to highlight the lack of service delivery. 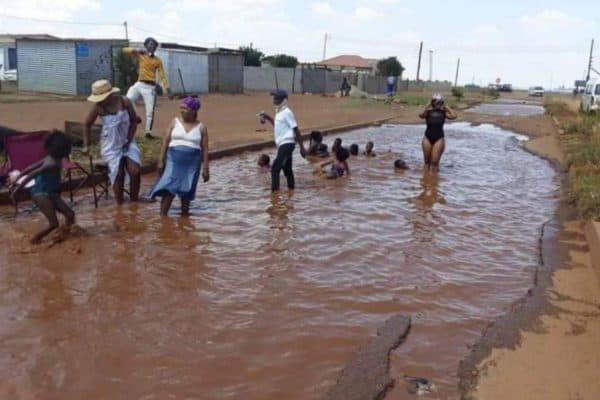 A pothole in Evaton West is so large that residents decided to swim in it. Picture: Twitter/@EversonLuhanga

When rain filled up a huge pothole over the weekend, residents used it as an opportunity to have a “pool party”, while also protesting the lack of service delivery in their area.

Pictures flooded social media as community members in Evaton West, south of Johannesburg, cooled themselves in the muddy water inside the pothole. Some even put their swimsuits on, while others dipped their feet into the water while relaxing in their camping chairs.

The pothole is so deep that the water covered the bodies of children that were enjoying a swim in it.

The residents of Evaton West, in the Emfuleni Local Municipality, however, weren’t just frolicking in the water to have fun – they wanted to highlight the lack of service delivery in their area.

The action comes as government and political party officials campaign across the country ahead of the local government elections on 1 November, promising to improve their services.

ALSO READ: Watch: Cele is ‘on tik’, Twitter says, after he blames WC hijackings on potholes

Locals in the area told Sowetan that the pothole first appeared in 2017 and they reported it at a community meeting with municipal officials.

“It is no longer a pothole. It is a dam, so we cannot blame the children for having a swim,” one resident said.

Another resident said the pothole was just one of many service delivery problems experienced in Emfuleni.

“Service delivery here is not right. This is supposed to be a tarred road but it has so many potholes. It is really a sad situation that we are facing here,” said Solly Lesese.