The EFF leader also had some choice words for police officers who happened to be keeping an eye on proceedings in the Northern Cape. 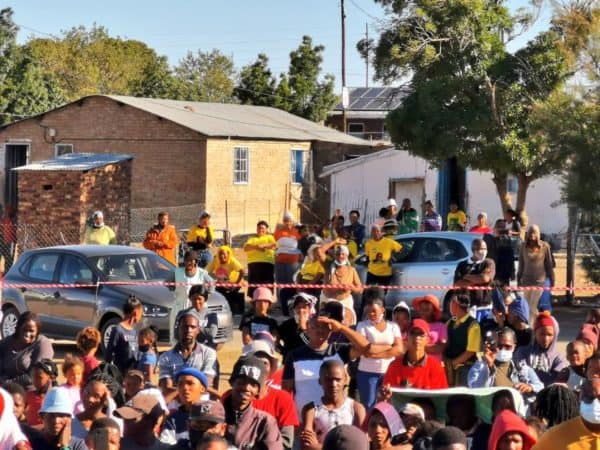 The EFF leader dragged a few people in attendance who were in African National Congress (ANC) T-shirts and also South African Police Service (SAPS) members who were monitoring the proceedings.

He left the crowd in stitches after telling EFF members not to be bothered by the ANC members in attendance because they were in search of proper leadership.

“We are here today. We are happy to see that even members of the ANC have arrived because they know where to find proper leadership. They have no leadership, they have abandoned their own people. These people are longing to see leadership,” said Malema.

“When they heard the leaders of the EFF are coming they had to come too because they know where leaders are found. So don’t complain that they’re bothering you; they’re just missing leadership and they can only find leadership in the EFF. How can EFF people wear EFF T-shirts and go to an ANC rally? We would never do that because we are proper upstairs; we have our own leaders. Those ones there are excited today because they gave them yellow T-shirts.

“What is the point of wearing yellow T-shirts, yet you still have pit latrine toilets? What’s the point? You should desire for jobs and houses because a T-shirt will not take care of you. You should be tired of being made fools by ANC people, busy buying you alcohol instead of jobs and proper roads.”

Malema further dragged the police and said they were also there to make the EFF leader aware of their struggles.

“Everyone is here. Even the police are here because they want us to fight for them to get a better salary and promotion. Many of them have not been promoted for the past 10 years. The police are not here to fight with us, they’re here to say to me: ‘We hope you see us. Don’t forget us when you arrive in Parliament.’ I will tell them ‘Honourable Speaker, police want promotions, salary increases and risk allowances and overtime pay. We talk for everyone because we are for everyone. Who is everyone? It is the oppressed.”

The party promised to build a house for an elderly woman in attendance, and also spoke out against the rising prices of school uniforms.