‘Tembisa 10’: Survé’s ‘gynae’ outed as a fraud by medical body

The Health Professionals Council of South Africa (HPCSA) has since started a probe into Dr Mpho Pooe for 'misrepresenting her qualifications'. 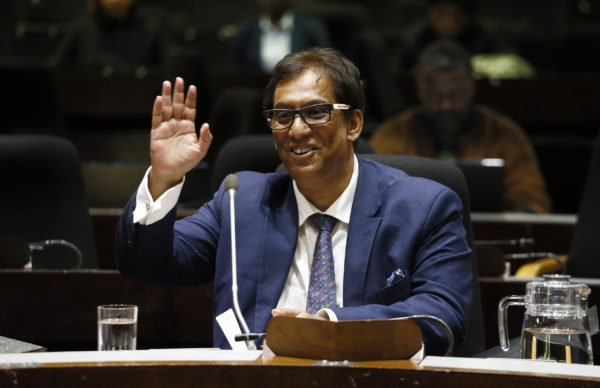 Another twist in the so-called “Tembisa 10” saga has emerged that the doctor who claimed to have examined the mother of the yet-to-be-seen decuplets, Gosiame Sithole, is not a gynaecologist nor a obstetrician.

On Wednesday, Independent Media Group’s boss Iqbal Survé held a media briefing alongside Dr Mpho Pooe, where he revealed that an internal investigation had confirmed that the 10 babies were born.

Survé said two had died and the other eight were “trafficked” through a syndicate that allegedly involves government and a number of hospitals.

During the briefing, Pooe, who claimed to have examined Sithole, was introduced as a gynaecologist and obstetrician.

However, the Colleges of Medicine of South Africa (CMSA) has suggested otherwise.

“Records confirm that Dr Mpho Pooe has not qualified as an gynaecologist and obstetrician, as per CMSA requirements,” clinicians at the Steve Biko Academic and Tembisa hospitals said in a statement on Thursday.

The validity of the statement was confirmed by Gauteng health spokesperson Kwara Kekana.

Meanwhile, the Health Professionals Council of South Africa (HPCSA) has since launched an investigation into Pooe for “misrepresenting her qualifications”.

“Dr Pooe is in general practice and has no additional qualifications recorded with the council. Dr Pooe is not on the HPCSA register as a trained obstetrician and gynaecologist,” HPCSA spokesperson, Christopher Tsatsawane told News24.

According to the HPCSA register of healthcare workers, Pooe graduated with a Bachelor of Medicine and Bachelor of Surgery (MB, ChB) from the Sefako Makgatho Health Science University, which was then known as the Medical University of South Africa (Medunsa), in 2003.

It further states that Pooe opened an independent practice in 2006.

The decuplets scandal first made headlines in June when the now-widely discredited story, published by Pretoria News editor Piet Rampedi, claimed Sithole had given birth to 10 babies in what would have been a new Guinness World Record.

Despite Independent Media’s reputation at stake, Survé and Rampedi stand by the story to this day.

Daily Maverick has since revealed that Independent Media’s internal report, dated 5 July 2021, on Rampedi’s decuplets story found that it was a hoax.

Independent Media’s Group ombud also recommended that: “The Pretoria News, IOL and the other titles in the group that had picked up the syndicated story of the decuplets publish a full apology to all readers with an accompanying explanation of how a hoax story ended up being published.”

READ MORE: Mkhwebane bashed for her tweet on the ‘Tembisa 10’ saga

After Survé’s briefing on Wednesday, the Gauteng government decided to go the legal route against Independent Media and Rampedi.

The provincial government maintained its stance that there was no record of the delivery of decuplets at the Steve Biko Academic Hospital or any other in the province.

The decuplets have yet to make a public appearance, with even their relatives questioning their existence.

The Citizen previously made unsuccessful attempts to reach the HPSCA for comment.