Raising boys, in general, is a real tough job no matter where you are in the world, but more than that - it is a privilege. “A friend asked me what it was like to live in a house full of boys, so I peed on her bathroom floor, ate all of her food in the fridge, told her 100 stories about Fortnite and when she was about ready to kill me, I hugged her and told her how pretty she is.” – Unknown

This joke recently popped up on my screen and it made me laugh so hard because it is so relevant and real, especially at this moment as my boys are now eight and 10 years old.

My eldest son turned 10 in September – what a milestone in his life and ours as parents.

Four years ago, I made the decision to move to the Eastern Cape with my boys, as Zachary was about to start school and my vision for their educational path has always been a more holistic approach. I have a Montessori background and both my boys attended my pre-school, which led us to choose the school they currently attend.

My journey as a mother has lead me on a path of being a more conscious parent, and recently a more peaceful one. This move was such a life changer for all of us, and this was evident when we started planning the big 10th birthday party.

We started off as per usual with the theme (and if you know my son then there could only be one). He opted for a soccer theme.

We then moved on to the guest list and that quickly spiralled out of control when we passed the 50 mark. I gently said to him that I would give him a few days to think about his list as we had some time before the invites needed to be sent out.

A few days later he returned with this idea: he no longer wants a party but he wants to have a tournament. This was so he could invite more than 50 kids and everyone can play and have fun.

This was definitely not what I had in mind when I asked him to think about his list, but I listened to him and the dealbreaker was when he said to me: “Mummy, I don’t want any gifts. I want people to bring money and give it to those boys we played against who had no boots. Remember them, mum? I also want them to come to my party so I can give them the money then they can buy boots.”

While it is obvious that he doesn’t grasp the concept or value of how much he will actually have to raise in order to do this, there was no way I could not make this happen for him.

Fast forward to the day of the tournament, we had 65 boys, all of whom played in their respective teams, had fun, ate cake, laughed and walked away exhausted, managed to donate over R4,000, and hand over to the boys from the football project.

At this moment, I stood in awe of my 10-year-old and with tears in my eyes, I realised that every time I doubted my parenting or his listening skills, I shouldn’t have, because everything led to this and it was so worth it.

Raising boys in South Africa has its challenges. I find that raising suburban boys and trying to give them every opportunity life can afford them while at the same time making them socially aware of what is happening around them has me being pulled in opposite directions almost daily.

I am the mother of two coloured boys in South Africa, they attend a school with a majority of white children and staff.

I love this school – I chose it and they love school too, which makes our lives fairly easy. We don’t love it so much on the days we have to sit around the dinner table hearing the story of how at swimming a white boy ripped a towel from my eight-year-old son, who accidentally took the wrong towel and said to him: “Don’t touch my stuff, you ugly coloured. Go there with the other ugly coloureds.”

Now, in 2019, I find it not only disgusting but heartbreaking to have to explain things like this to my boys. As a family of strong Christian values, I teach my boys to make friends with people who have good hearts and strong minds and to pray for those who don’t.

My boys are different people; Alex is wild, tough, and adventurous and Zach is gentle, timid, and playful. They are naughty sometimes and mischievous other times. They are also loving children, with hearts of gold, they hate to see others go without and they are very helpful human beings.

As parents, we tend to be so hard on ourselves and even harder on our children because we want to raise “perfect people”. We ourselves are not perfect and most of us have had 30+ years to try and figure this thing called life out, so why we pressure our kids into perfection is beyond me.

Let them live, let them try and fail, allow them to choose –  even if it isn’t always going to be the right choice, guide them, pray with them and for them, enjoy the silly moments, and let them be who they are. Teach them things that matter, like being kind to the guy begging at the traffic light, being a friend to the kid who seems lonely, and sharing their lunch.

Not all children are going to be A+ students or play first-team sports. Some boys want to sing and others want to play sport and that is okay, accept who your child is and they will accept themselves. Allow your boys to have emotions of anger, frustration, and heartache, and teach them how to deal with it. Teach your boys that violence is never the answer, especially against women.

Moms and dads need to respect one other and show their boys how to respect women and each other. Tell your boys that they need to make sure 100 times, if need be, before even touching a girl that it’s consensual and that it’s not being a wuss, it’s being a gentleman.

In South Africa, we have issues like poverty and racism to tackle and it’s all around us every day. I want to give my boys the best of everything because I want them to want to give back to those who do not have, even if giving back is not in material value, it can be in time, love, energy, and work.

Raising boys in today’s world is not easy; trying to keep up with the trends but not overdoing it. Raising boys in South Africa is more challenging now than ever before with the “men are trash” hype and the drug epidemic eating away at our young children.

Raising boys, in general, is a real tough job no matter where you are in the world, but more than that it is a privilege, an honour and a task that all mothers who have been assigned this role can and must fulfil with the utmost dignity.

Boy mothers, all mothers, the world salutes you for every effort you make every day – YOU ARE DOING GREAT!

“To be a mother of a son is one of the most important things you can do to change the world. Raise them to respect women, raise them to stand up for others, raise them to care for the earth, raise them to be kind, compassionate, and honest. If you do these things, you are raising a leader – someone that will affect the lives of countless people with their morality. Their future wife and children will thank you, but most of all heavenly father. For anyone can raise a son, but only a faithful daughter of God can raise a warrior.” – Shannon L Alder 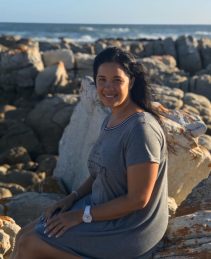 About Anastasia Klate:
I’m 35 years old and the mother of two gorgeous boys aged eight and 10. I have a background in ECD and studied early years learning in London then furthered my studies in the field of Montessori Education before moving on to starting my own school in 2010. We currently live in the beautiful city of Port Elizabeth and I enjoy my days as a full time stay at home mom.