The car was later found dumped at a nearby driving range. 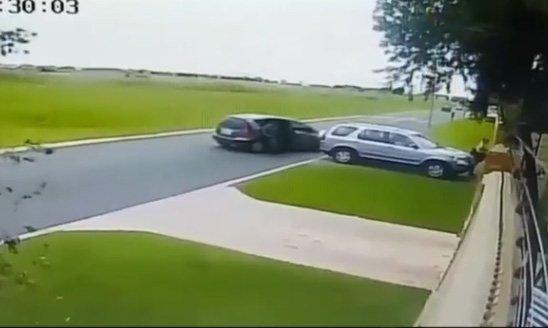 Screen-grab of the incident

The car was later found dumped at a nearby driving range.

The victim, who was driving a silver Honda CR-V, was parked in the driveway of a house. It appears as if she was dropping off a girl.

The video first shows a girl walking to the gate. A few seconds into the video, a grey Mercedes-Benz pulls up behind the SUV.

An armed man immediately comes out running from the back door, drops something in the process and goes straight to the driver’s door.

A second man emerges, also running, and picks up what his accomplice has dropped.

The driver of the SUV, a woman, is forced out of the car. Another girl, who was in the passenger seat, also gets out of the car and runs towards the gate.

One of the men appears to be saying something to the woman for a few seconds, before getting into the back of the SUV and driving away, following behind the Merc they arrived in.

The woman then walks towards the gate and looks on helplessly as her car disappears down the street.

Kempton SAPS spokesperson, Capt Jethro Mtshali, said the vehicle was later recovered at a driving range not far from the scene of the crime.

“The suspects had stolen a laptop, wallet and a schoolbag from the car. The victim’s wallet contained her bank cards and driver’s licence,” Mtshali confirmed.