The finance minister has refused to make representations ahead of his upcoming court case, reiterating the view that he has no faith in Shaun Abrahams. 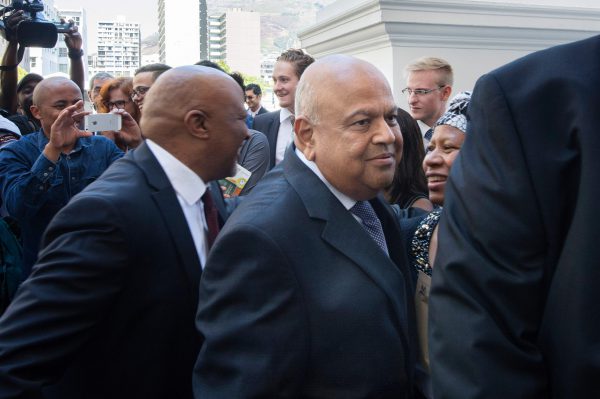 South Africa's Minister of Finance Pravin Gordhan(C) arrives at the National Assembly in the South African Parliament where he was due to deliver the 2016 Budget Speech, on February 24, 2016, in Cape Town. Picture: AFP

Finance Minister Pravin Gordhan on Tuesday told National Prosecutions Authority boss Shaun Abrahams that he would not be making any representations regarding his court case and instead told the NPA to withdraw charges against him.

Gordhan’s lawyers, Geldenhuis Malatji, sent the letter to the NPA as the 5pm deadline for representations set by the NPA loomed.

“We have seen the letter by Freedom Under Law and the Helen Suzman Foundation dated 14 October 2016 in which we were copied. We invite you to withdraw the charges against our client in the light of the grounds set out therein. Our client does not intend to make representations to you for the considerations previously articulated,” read the lawyers’ letter.

The response to the NPA came after Gordhan’s two co-accused, former South African Revenue Service commissioner Oupa Magashula and deputy commissioner Ivan Pillay made their representations to the NPA on Monday, after which Abrahams told Gordhan that he had until 5pm on Tuesday to do the same.

Gordhan, who was expected to appear in the North Gauteng High Court with his co-accused next month, last week issued a blunt statement rejecting Abrahams’ invitation to him to make representations to have the fraud charges against him reviewed.

He said he did not trust the prosecutions chief to give him a fair hearing.

The minister’s battle with the NPA and the Directorate for Priority Crime Investigation (the Hawks) was seen by many as attempts by those in power to wrestle national Treasury from him in order to allegedly complete the capturing of the State and its entities by the controversial Gupta family.

Gordhan was seen as an obstacle to controlling the public purse and therefore would reportedly be removed from his post through the fraud charges. The charges related to the early retirement of Pillay granted by Gordhan.

Gordhan filed a damning affidavit in the North Gauteng High Court asking for a ruling that he was not legally bound to interfere in the country’s banks’ affairs after the big four banks severed ties with the Guptas several months ago.

The explosive document detailed suspicious financial transactions by the Gupta family and its companies totalling R6.8 billion since 2012 reported by the Financial Intelligence Centre. The affidavit was to show that the four banks were not in the wrong when they shut down the Gupta accounts.

The Gupta family, who have close ties to President Jacob Zuma, rubbished Gordhan’s affidavit on Tuesday and said they were looking forward to clearing their name and that of their businesses.