Former Springbok, Heinrich Brüssow and his wife, Caroline-Grace have recently shared photos of their daughter’s baptism. Isn’t she cute? 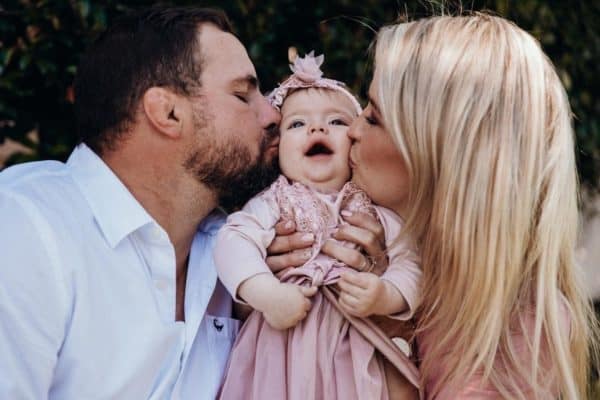 Heinrich and Caroline-Crace Brussow with their daughter at her recent christening. Image: Facebook

It will be to no one’s surprise when former Springbok rugby player, Heinrich Brüssow and his singer wife, Caroline-Grace’s baby girl, who was born early in March this year, turns heads wherever she goes once she’s all grown up.

Even at the young age of eight months, she already turned heads at her recent christening, beautifully dressed in pink. Iza Grace clearly knows about being the ball of the party, as she was also born a week too early, surprising everyone in her family with her graceful wit.

Even just after her birth, Iza Grace’s singer-mother shared the most beautiful mother-daughter photos of the two of them, all clad in pink and white florals, proving that natural beauty is carried through from generation to generation after all.

The newborn shoot was echoed only a couple of months later, with Iza Grace dressed in pink from head to toe for her christening, which recently took place in Keurboomsrivier in the Western Cape.

READ: Faf de Klerk and Miné on the difficulties of a long-distance relationship

The big-eyed baby girl’s soft pink outfit – complete with a large bow in front, matching shoes and a floral headband from the same fabric – personified a peony, a flower that symbolises honour and prosperity among other things. This was quite fitting too, as her name, Iza Grace means ‘God is abundance, God is my oath’. For her christening, the family also matched her outfit with pastel pinks, white shirts and khaki pants.

Heinrich Brussow, who was forced to announce his immediate retirement from rugby due to a number of consecutive injuries in 2019, is clearly the world’s best dad. Caroline-Grace recently shared a photo from a pregnancy shoot they had done, saying that Heinrich is their number one, “a dad who is always ready to help and just gives his best every second of every day.” She thanked him for carrying them on his shoulders every day.

The couple’s son, Marcel Werner, turned one in December 2020.

Rugby might be in her blood, but Iza Grace seems to take after her mother when it comes to natural beauty and pure femininity. Isn’t she gorgeous?