Springbok lock Franco Mostert and his wife Juan-Ri’s son is due to be born in less than a month’s time and they’ve recently shared special family photos from their maternity shoot. 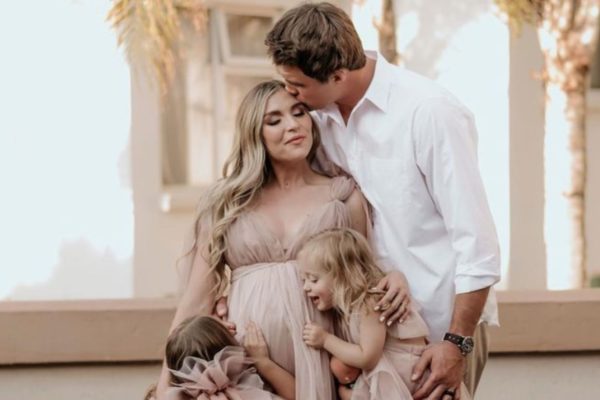 Being the wife of a Springbok rugby player clearly doesn’t come without its challenges.

Juan-Ri Mostert’s caesarean is booked for 22 December and her husband, Bok lock Franco Mostert, flies out to Japan on Christmas Day. Still, when they are together, the couple and their two little girls, Joia-Belle, 4, and Jemi-Mílja, 2, are a close-knit family of four, soon to be five.

Juan-Ri told Huisgenoot that if there was one thing about her pregnancy that she would have wanted to be different, it would have been to be with her husband more often.

“But I know it made our relationship so much stronger, and me as mother,” she said.

Franco Mostert has been travelling back and forth for rugby matches and recently played his 50th test match for the Springboks.

In a recent Instagram post, Juan-Ri wrote that the past six months were, without a doubt, an unplanned journey for which they weren’t necessarily prepared.

She says they didn’t see much of Franco in this time, and they didn’t speak to him as often as they would have liked to, as time zones, load shedding, signals and responsibilities with the kids all had an effect on how much or how little they could communicate.

The post boasts a couple of photos from their recent maternity shoot, in which Franco’s wife is the epitome of elegance. The couple’s daughters – one blonde and one brunette – are clearly just as excited about their little brother’s arrival.

For the maternity shoot by photographer Mandy Stander, Juan-Ri and her two daughters wore soft pink dresses by Riana Grobler and Juan-Ri says she cannot believe that it’s almost time to meet their son.

Franco and Juan-Ri’s son already has a name, but they have decided to keep a large part of it a secret until his arrival.