The story of Ladysmith Black Mambazo (LBM) is not one which will be easily forgotten. A young Joseph Shabalala leaves his home in Ladysmith in the Fifties to find work in Durban. During the day he fixes cars, and by night he sings his heart out with the Highlanders, a popular group at the time. 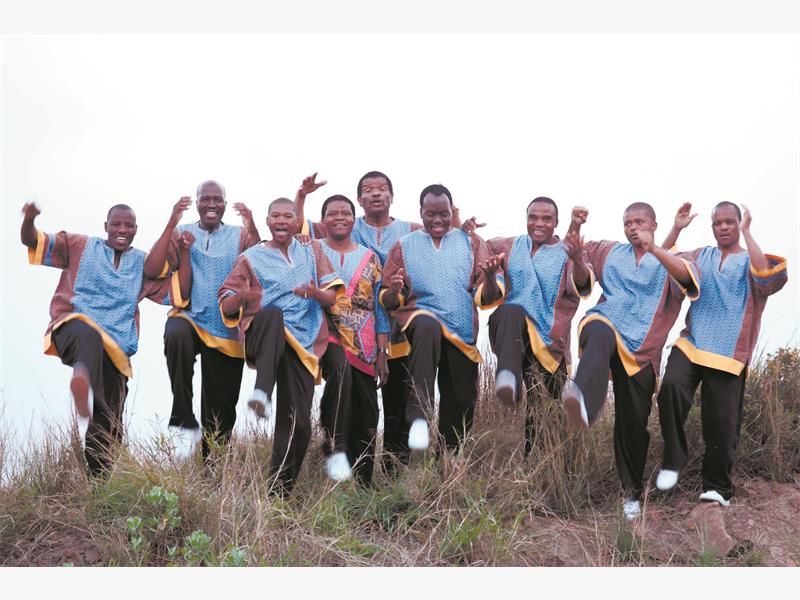 It is this musical experience, together with a series of dreams in which he heard beautiful harmonies that then inspires Shabalala to gather his brothers, cousins and close friends to form what will become one of South Africa’s most successful musical groups. This year, LBM celebrates 54 years in the music industry and they are to be honored with a lifetime achievement award at the 20th South African Music Awards (Samas), which take place on Monday April 28.

“Getting this award is a huge honor for us,” says the group’s Albert Mazibuko, Shabalala’s cousin and one of the original members of the group.

“Being given this award is like South Africa saying thank you to us for being great ambassadors of local culture and heritage through our music.”

AMBASSADORS. Ladysmith Black Mambazo recently arrived back from their latest US tour.

As a popular outfit in the Sixties, LBM started entering isichatamiya competitions, many of which they won. This is how they got the name Ladysmith Black Mambazo. Ladysmith is Shabalala’s hometown, “Black” refers to black oxen, which are considered the strongest animals on the farm, and Mambazo refers to an axe – a symbol of the group’s ability to “chop down” the other groups who competed against them in the competitions.

The group has recently returned back home after a nine-week tour of the United States, where they also received their fourth Grammy Award, a testament of their international success. But the story of LBM cannot be seperated from the history of South Africa. Their distinct choral singing style, called isicathamiya, originated in the mines and travelled with the migrant workers as they returned to their rural homes. With rich vocal harmonies and messages of hope in their songs, LBM are world-class musicians who fly the South African flag high, a role they don’t take lightly.

“The journey of Ladysmith Black Mambazo started in South Africa and we were celebrated here at home long before we became internationally acclaimed,” says Mazibuko.

After their collaboration with Paul Simon on the hugely successful album Graceland in 1986, LBM went on to work with the likes of Stevie Wonder, Ben Harper and Michael Jackson.

The group’s CD titled Live: Singing For Peace Around The World, which earned them their fourth Grammy Award as the Best World Music CD of 2013, was a tribute to the late former president and global icon for peace, Nelson Mandela.

“When we met met Nelson Mandela a few years ago, he told us that we are South African cultural ambassadors and that it was our duty to spread the message of peace,” says Mazibuko.

“Since then, that has been our mission with our music.”

LBM has changed since its formation more than half a century ago. Shabalala, who has always led the group musically, didn’t travel with them during their US tour. This led many to believe that the 72 year old was retiring.

“You can’t retire from music,” Shabalala said earlier this year.

“I am older now, and when you’re older you need to slow down and let others take the lead.”

Shabalala has taken the time away from the group to produce a stage musical called Amambazo. The production, currently showing at the South African State Theatre, traces the story of LBM through their popular songs, and the singers perform daily during the production.

LBM will remain focused on the musical before heading off to the United Kingdom in July.