The romance of iscathamiya music informed the core of the musical Amambazo, based on the life of Ladysmith Black Mambazo (LBM) frontman Joseph Shabalala. 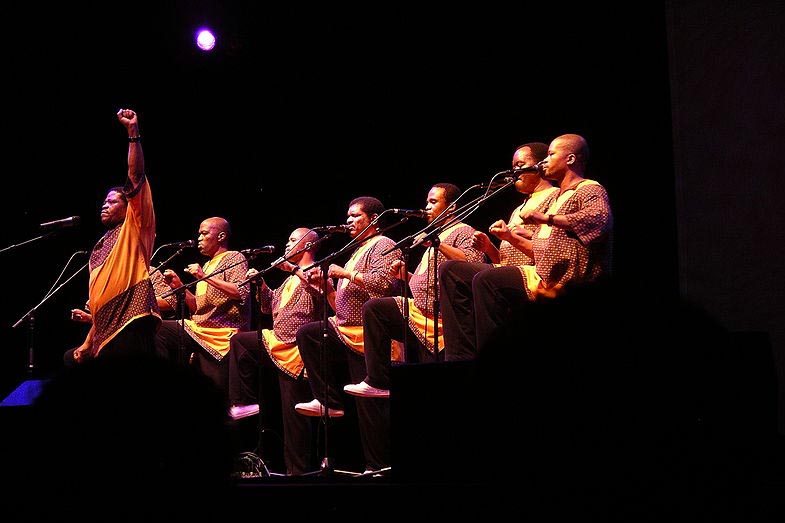 If city plebs had forgotten the beautiful a capella harmonies of iscathamiya, made famous by the Grammy-winning LBM, then this show is a reminder of the group’s prowess. On stage, the production is a great spectacle filled out by a big cast and features several costume changes and all the song and dance magic expected from a large-scale musical.

The story tells the tale of a young Shabalala as he longs for the love of a beautiful young maiden, Nomathemba – and of his musical journey from humble beginnings to world acclaim and fame. The hit track Nomathemba features early on in the production, energising the audience and lifting them out of their seats.

Much of LBM’s appeal has to do with their ability to generate excitement from minimal movement. The voices of the cast – provided by the group Young Mbazo, an offshoot of Ladysmith Black Mambazo that also features Shabalala’s son, Babuyile – are remarkable, with their singing ability mimicking their elder’s vocal prowess.

It is easy to forget that this is not the original LBM – until the real deal appear on stage for a few songs. Some members of the group still remain, but their passion remains strong and new choreography has been crafted.

Great emphasis is placed on playing for laughs as the story unfolds. When recalling memories of their first time in a recording studio or their first time on an airplane, the band – via the actors – use comedy to tell of their encounters. This sometimes makes the show too similar to the stylised shenanigans of the minstrels at a Cape Town carnival. As a result, the piece sometimes feels devoid of authentic emotion during the more dialogue-driven sements.

The singing, however – along with the spot-on appearance of the group – is enough to entertain audiences.