The internet has a way of turning serious matters into something to lighten up your day. 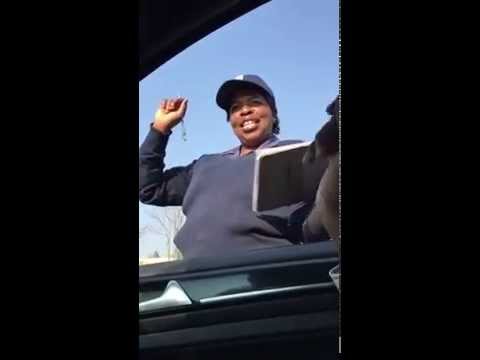 A screen grab of the JMPD officer evolved in an altercation with a motorist.

People cannot seem to eat good food at a restaurant or witness an event and not share it with the world. While there are those who like sharing videos, there are also those who enjoy turning them into hit songs.

Recently, Clive Naidoo made headlines when he posted a video of himself having an altercation with a traffic officer. Naidoo thought he was exposing the officer’s misconduct, but hey, the internet is unpredictable. The guy seemed to have shot himself on the foot when the internet made fun of him.

Nandos, as usual, grabbed the opportunity and created it into an advert which reads: “Clive, you have been served”.

In this week’s edition of Jukebox Thursday, we give you the best five viral videos which were turned into songs.

Clive Naidoo is a famous man now, this after a video of him and a traffic officer went viral. The officer owned it, when she became aware he was taking a video of her, she just added the drama and commended him for using an iphone because “the pictures will be clear”.

Mr Willie made it to the internet for being a Walmart greeter. In the original video, Mr Willie was explaining what his job as a greeter entails. One of the things he mentions is to give customers a Bam! Obviously, the internet got hold of that and turned it into a song. Enjoy!

3. A piece of burger remix

Remember we once ran a video of a man recorded describing an incident where police where chasing a motorist? Well, if you remember well, the video did not go viral because he was the only witness to the incident but it was all in the way he described the incident, such drama! It also turned out the guy was wanted for shoplifting, so he handed himself in to the police following the video.

In 2010, former police commissioner Bheki Cele made a speech about police officers’ fitness. He told cops that “people must envy your body” and to walk “stomach in, chest out.” And obviously, his comments were posted on YouTube and inspired a this hit which synchronised his speech with dance beats.

Who could ever forget Malema’s press conference where he chased a BBC journalist out of the venue?  Some of the comments he made were “here you behave or else you jump” and “Rubbish is what you have covered in that trouser”. This was turned into a track of course.

Which one did we leave out? Share in the comments below