“For him at this moment it is important to keep his feet on the ground and not go flying around catching butterflies," said Middendorp. 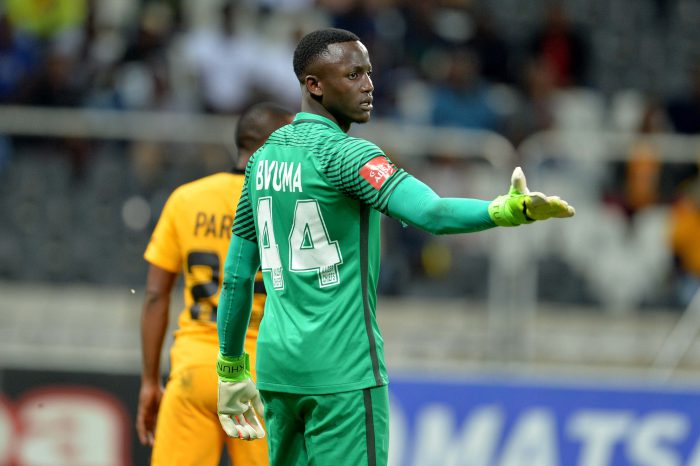 Kaizer Chiefs coach Ernst Middendorp is worried that his young goalkeeper Bruce Bvuma may allow his new found fame to go his head and disturb his progress in the team if he allowed “new friends and relatives” to dictate his personality now that he is getting regular game time.

Speaking to the media ahead of the side’s crucial Nedbank Cup quarter final where they host Cape Town City at Mbombela Stadium in Nelspruit on Sunday, Middendorp said he would be having a long chat with the 24-year-old keeper.

Asked about Bvuma’s call up to the Bafana Bafana team who played Libya last weekend, Middendorp said it was good for him to gain experience.

“It is fine for Bruce, it is fine for his experience,” said Middendorp. “I only have to chat with him now. You know at such a time you get a lot of new friends, a lot of new people interested in you and you probably easily get carried away.

“For him at this moment it is important to keep his feet on the ground and not go flying around catching butterflies. He has to make sure that he is solid and concentrated on his job,” added the German mentor.

Urged to clarify what he meant with new friends, Middendorp said: “Your family members that never called you before suddenly call you. An uncle from Limpopo you never knew you had… you have brothers you last saw five years ago when you finished school… you have agents posting on social media congratulating you and you are trending on social media.

“Can you imagine coming from nowhere and all of a sudden you have this spotlight. It’s normal that we have to mentor these kind of players. We have to talk with them. As things stands, we have good communication here and with Lee Baxter he is someone capable of knowing exactly what we mean.”