“Yes, we dropped points but now we focus on the midweek game against Chiefs,” said McCarthy after his side’s game against Bloemfontein Celtic. 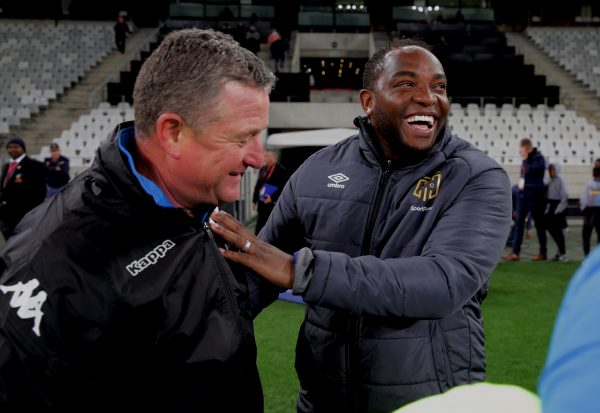 Benni McCarthy and Gavin Hunt meet again on Wednesday, this time in the colours of AmaZulu and Kaizer Chiefs. Pic: Chris Ricco/BackpagePix

AmaZulu coach Benni McCarthy has shifted his attention to slaying Kaizer Chiefs on Wednesday afternoon in their league encounter.

McCarthy will face his former coach and mentor Gavin Hunt in a league encounter. This will be the first meeting of the master and student since the former Bafana Bafana striker returned to coaching in the PSL after taking over as the trainer of Usuthu.

The pair did meet several times when McCarthy was coach of Cape Town City and Hunt was in charge of Bidvest Wits. And the student had the advantage over the master in those games, winning four of seven meetings in league and cup, while Hunt won two and one match ended in a draw.

McCarthy believes his AmaZulu side were unlucky to drop points against Bloemfontein Celtic in their away game on Sunday. The former Bafana Bafana and Blackburn Rovers striker says he will not change his approach to the game against Chiefs but emphasised they need to be clinical in front of goal.

“Yes, we dropped points but now we focus on the midweek game against Chiefs,” said McCarthy after his side’s game against Bloemfontein Celtic.

“Against Chiefs, we’ll try and do exactly the same as we did against Celtic, but we have to work hard and put the ball in the back of the net.”

Chiefs have been dealt a major injury blow with playmaker Khama Billiat suffering a broken leg and Leonardo Castro nursing a muscle strain ahead of their match with Usuthu.

Billiat was taken off when they faced Maritzburg United on Saturday, after Travis Graham kicked him on the shin while they were challenging for the ball.

The injuries only add to Chiefs’ woes, with Amakhosi having only won one of nine DStv Premiership encounters since the start of the 2020/21 season, with the only bright spot their qualification for the group stages of the Caf Champions League

“It is not good enough, we have got to get it right, we have been working tirelessly,” said Hunt this week.

“I have seen enough that make me believe we are better than our results. But that doesn’t always work, you need to get results.”

Hunt also believes it is “too early” to talk about the possibility of relegation, with Chiefs just a point above the drop zone.

“The league is so tight one win jumps you up the table, but we need to win,” added Hunt, whose side have six more Absa Premiership games to play before the end of January, culminating in a Soweto derby against Orlando Pirates on January 30.