When you've had nine singles from an 11-track debut album, all of which reached the top 5 on the 5FM top 40 (a South African record), putting out a follow-up album may prove challenging. GoodLuck's solution: venture out into the desert and record outdoors. GoodLuck at the Ongava Lodge in Etosha

Started as a passion project, grown out of a weekly residency in Camps Bay, GoodLuck’s career has been a constant testimony to their band name.

“When we made the first album none of us knew what we were doing,” explains producer Ben Peters.

“I’d never produced an album before or even worked on electronic music. We just came together and spewed out an album.”

“Our whole plan was to make new songs, hope that one of them would do really well, and then do a second album where we would make more of whatever worked. But it all did well, and we were stuck in exactly the same place,” adds vocalist Juliet Harding. 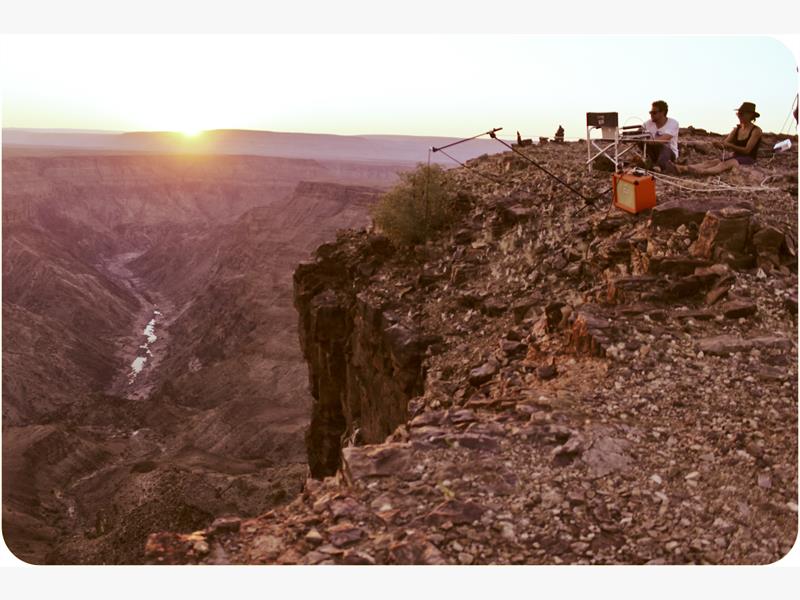 CLIFF HANGER. Ben Peters recording “the most expensive delay” in the world at the Fish River Canyon, by hanging a microphone over the edge of the cliff and recording the natural echo.

After exhaustive research, much arguing and problem solving, aided by some crazy imagination, they had a plan. In an attempt to find inspiration – and since all the members possess a strong passion for the outdoors – the band set out to Namibia, where they would start capturing new and interesting sounds to form the basis of their second album.

As diverse as the first album was, GoodLuck are out to create yet another South African record. If it’s not nine follow-up singles then it will be the fact that they sampled the sounds of nature this time around. Using the bark of a zebra as the hook for a song, and the sound of the ocean roaring up the steep pebble bank at Skeleton Coast for white noise, GoodLuck’s album, titled Creatures Of The Night, is intriguingly unique. GoodLuck’s mascot suffered the heat of the Namib desert

“We wanted to bring realism back into electronic music. The pioneers of electronic artists used samples from organic albums – acoustic, funk and soul – and turned them into break-beats. Nowadays it’s really just about synthesis, listening to each other and emulating what they think they should be doing. We really just wanted to break away from that.”

The reason Goodluck went to Namibia was for meteorological reasons more than anything else. Namibia provided the peace and quiet needed to achieve their goal. What has been achieved is a great second album and an added bonus DVD that captures the band’s cross-border experiences.