Chiefs trolled for derailing matriculants with their ‘bad luck’

Kaizer Chiefs saw a tweet that was meant to wish matriculants well turn into a slap on the face for them. Chiefs joined the chorus of South Africans who have wished 2020 matriculants luck when they start to write their end of year exams. However, some supporters felt the bad spell of results the Soweto giants have experienced could rub off on the students.

READ: Hunt laments the absence of supporters boost for his Chiefs team

Chiefs have had a bad start to the 2020/2021 DStv Premiership season, losing one match, drawing one and winning only one match against Chippa United, through an own goal from the Chilli Boys.

Amakhosi suffered a humiliating 3-0 defeat in the Soweto derby to cross-town rivals Orlando Pirates in the first leg of the MTN 8. Pirates will again face Chiefs on Sunday in the second leg of the top eight semifinal competition. 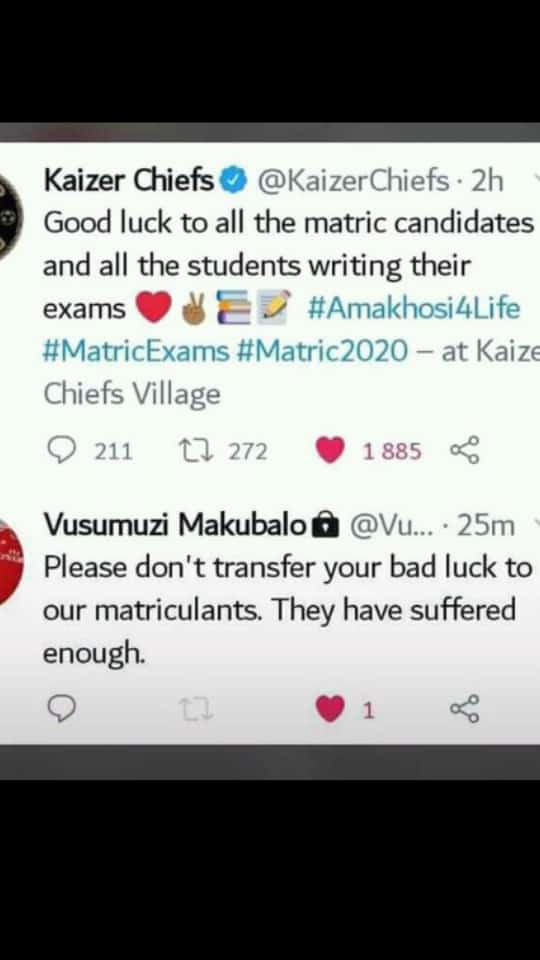 The arrival of coach Gavin Hunt at Chiefs was thought to be a good omen for the Glamour Boys, but it seems the former SuperSport United coach is struggling to get the group of players that finished in second place last season firing at this stage of the campaign.

Some Amakhosi fans feel the club’s management and technical team are out of ideas after the Chiefs were banned from signing players until July 2021. Chiefs were accused of signing Andriamirado ‘Dax’ Andrianarimanana illegally from Madacasgan side Fosa Juniors.

Hunt has tried different combinations in the starting XI since joining the club stating in his pre-match interview before the TS Galaxy game that he still needs to see what all his players can offer.

“Good luck to all the matric candidates and all the students writing their exams,” read a tweet from Chiefs.

Vusumuzi Makubalo responded by saying, “please don’t transfer your bad luck to our matriculants. They have suffered enough,” read the tweet.

Some fans believe Chiefs should concentrate on games and how they will turn their fortunes around on the field instead of on anything else.

Good luck to all the matric candidates and all the students writing their exams ❤✌???????????? #Amakhosi4Life #MatricExams #Matric2020

And then you decided to talk about school exams pic.twitter.com/rCNPV4UvJI

Yhima nyana, dont tempt with our matrics, we all know what you guys touch with bobby turns into a disaster. pic.twitter.com/NMI9aqzxmG