"We observe (the goalkeepers) during the week and we will see … Daniel is our keeper in the Premiership (games) and Bruce is for the Nedbank Cup," says Middendorp. 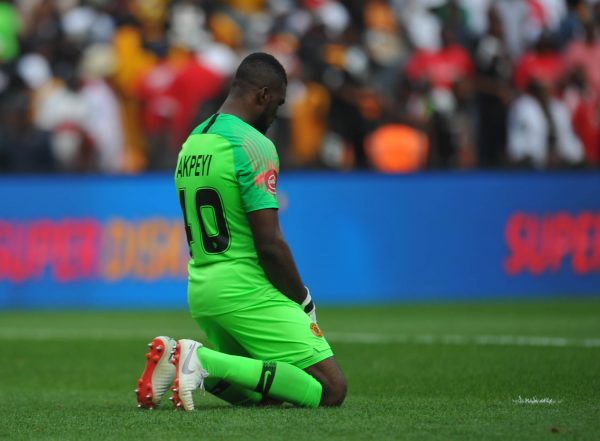 Kaizer Chiefs coach Ernst Middendorp has admitted that the goalkeeping errors which have plagued his team over the past weeks are becoming an irritation but pledged to continue putting his trust in Daniel Akpeyi (above) in Absa Premiership games and Bruce Bvuma in Nedbank Cup games.

Nigerian international Akpeyi fumbled what looked to be an easy catch to gift Polokwane City an equaliser in a 1-1 draw at Peter Mokaba Stadium on Saturday afternoon, stalling Amakhosi’s Premiership run.

Walter Musona took a shot from long range and Akpeyi looked to have it under control but it somehow went under his body and into the net 10 minutes after Chiefs had taken the lead through Daniel Cardoso’s penalty in the first half.

With a win, Chiefs would have been on 31 points, seven behind leaders Bidvest Wits.

“Actually, if I could have an explanation for it as to why we conceded such goals against Sundowns, against Cape Town City and again today, I would. This can’t be explained,” said the coach afterwards.

“This is irritating … of course it is not comfortable for us to concede a goal in such a way. I didn’t see any other possibility for Polokwane (to score) and we scored two goals today,” he added.

But with his third keeper, Virgil Vries, having made more horrendous blunders that cost Amakhosi six points in the 2-1 defeat to both Sundowns and Cape Town City, Middendorp doesn’t seem to have much of a choice.

“We observe (the goalkeepers) during the week and we will see … Daniel is our keeper in the Premiership (games) and Bruce is for the Nedbank Cup,” he said.

He was also not satisfied with the result, believing they could have made better use of the chances they created on the day to get the win.

“The result didn’t reflect the game. We started well and definitely had more possibilities to score goals. We got disturbed and distracted by conceding that equaliser. We pushed again for the winner but it was not to be.”