Is Shalulile proving to be worth his ’30-million’ price tag?

"He is one of the most professional players I have worked with," said Sundowns co-head coach Manqoba Mngqithi on his star striker. 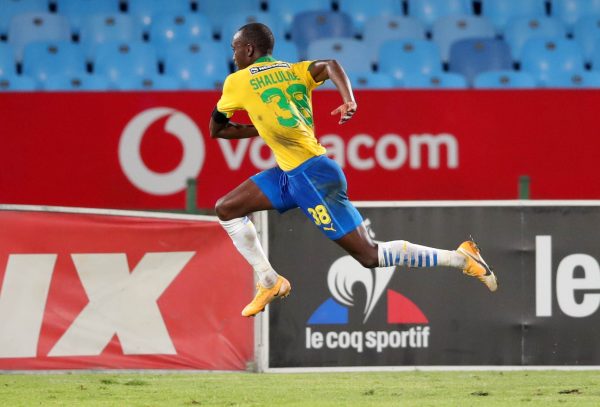 When Highlands Park slapped Mamelodi Sundowns with a price tag believed to be around the region of R30-million for the services of Peter Shalulile back in September last year, a lot of eyebrows were raised suggesting he might not be worth all that money.

Of late, however, match-after-match, it seems he convinces more people that he more than worthy of having all that cash splashed for his services.

Shakulile joined Sundowns from the Lions of the North when its owners were looking to cash in on the forward before selling their top-flight status to TS Galaxy.

How’s that celebration though ???? pic.twitter.com/KBSWLOShyq

“He is one of the most professional players I have worked with. You can never falter anything when it comes to his level of performance and the way he tries to adapt to the tactics and what the coaches are asking from him,” said his coach Manqoba Mngqithi after Shalulile had netted a brace, including the winner in extra time, in a 3-2  Nedbank Cup last 32 victory over Stellenbosch FC.

“The physical exertion that he puts into the match and the commitment that he gives you is the epitome of what you would want to have,” added Mngqithi.

“You would want to have more than five Peter Shaluliles in the team and in our team we have got more players like that who are relentlessly trying to do the best for the team. In terms of his scoring, more than anything, I appreciate the fact that he is not selfish.”

Shalulile has been one of the most consistent performers this season, having contributed to 10 goals in the DStv Premiership, with six goals paired with four assists, while he has also banged in in three goals in other competitions.

“He is trying to repay the confidence that the team and the president has shown in him for having invested so much money in making sure that we get him,” said Mngqithi.

“We expect a lot of players to be that selfless in making sure that it is not about them getting what they want but it is also about them giving themselves to the team, and that is what Peter is. He is not really a refined striker, he still makes some elementary technical mistakes but you can live with those mistakes because he gives you his heart.”