McCarthy heaped praise on his players for sticking to the plan against a "quality" side like Chiefs. 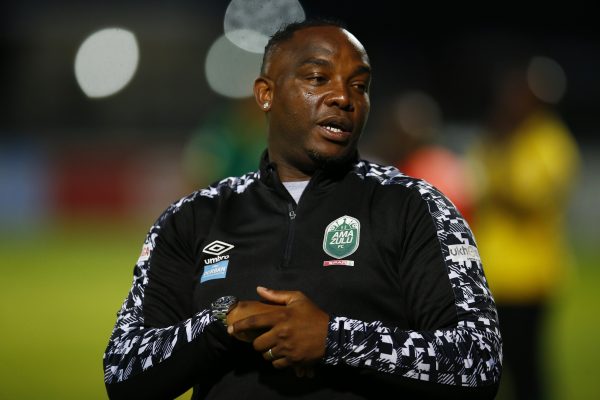 Benni McCarthy, head coach of AmaZulu happy with the win over SuperSport United but demands more from his strikers. Picture: Steve Haag/BackpagePix.

AmaZulu coach Benni McCarthy has revealed that they knew Kaizer Chiefs’ threat going into Wednesday’s DStv Premiership clash and they planned against them accordingly.

Goals from Augustine Mulenga and Lehlohonolo Majoro earned Usuthu a 2-1 victory over AmaKhosi at FNB Stadium, with Leonardo Castro scoring the consolation goal for Chiefs from the penalty spot.

Following the win, McCarthy heaped praise on his players for sticking to the plan against a “quality” side like Chiefs.

“When you’re on the winning side it’s always nice and everything is positive but today I think I have to give the boys a lot of credit,” McCarthy told SuperSport TV after the game.

“We knew the threat that Chiefs carried from the first game we played against them. We were excellent and played super well against them in that game but came away disappointed.

“I think today we just tried to nullify the mistakes of giving the ball away to them because they are a team with many quality players who can hurt you really badly,” added the former Bafana Bafana striker.

“So if we keep making mistakes in the wrong area of the field to go alongside the quality of Chiefs they could really hurt us.

“So today I think we kept it a little tighter and we were then just being patient in our build up.” concluded McCarthy.

The win took Usuthu up to sixth in the DStv Premiership table and stretched their unbeaten run to eight games in all competitions.