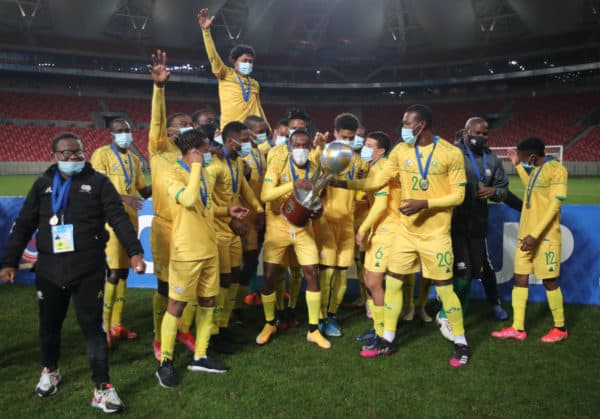 Bafana Bafana pulled off an unlikely triumph in this year’s Cosafa Cup, with circumstances hardly in their favour following a spate of withdrawals and forced absences caused by the Covid-19 pandemic.

Those that did step up can have done themselves no harm in terms of making a claim for a spot in the squad for the upcoming Fifa World Cup qualifiers, though selection of many is still unlikely given that this was a third-string Bafana at best.

Phakaaathi takes a look at five players who did raise their hands and who might just be considered by Hugo Broos, when he finally arrives in the country to start coaching, and when he selects his squad for the Qatar 2022 qualifiers.

Bafana will need as many leaders as they can get in what looks a mountainous task to qualify for the World Cup, and they would certainly have one in AmaZulu goalkeeper Veli Mothwa, who wore the captain’s armband in the Cosafa Cup, and led from the front, or back, if you like, as Bafana did not concede a single goal in the tournament. Mothwa even had the gumption to take a penalty in the shootout in the final against Senegal, and even if he is not first choice for the World Cup qualifiers, with Ronwen Williams likely to get that role, he would provide a more than useful back-up.

The Mamelodi Sundowns defender’s star continues to rise, and he was an assured presence at the back for Bafana throughout the Cosafa Cup, playing in every match, and even two in 24 hours when he started in the 4-0 win over Lesotho and then came off the bench in the goalless draw with Zambia, after what was a bizarre piece of scheduling from the tournament organisers. De Reuck only made 15 appearances in all competitions for Sundowns in his first season and will hope to cement a more regular place in the new campaign, which would also enhance his prospects with Bafana.

Yusuf Maart was probably the most surprising star in the Bafana Bafana ranks at the Cosafa Cup, even though the former Orlando Pirates youngster did have a good season with Sekhukhune United in the GladAfrica Championship. Maart was superb in central midfield for Bafana, especially in consecutive man-of-the-match displays against Zambia and Mozambique. In the semifinal against Mozambique, the 26 year-old even came up with one of the goals of the tournament, a brilliant curler as South Africa romped into the final.

Scoring one goal on your Bafana debut is impressive enough, but scoring a hat-trick is something else, and that is what Bloemfontein Celtic striker Victor Letsoalo managed as South Africa thrashed Lesotho 4-0 in the group stages. Letsoalo followed that up with another in the semifinals against Mozambique, albeit from the penalty spot, as he became South Africa’s top scorer in the history of the Cosafa Cup.

Siyathemba Sithebe has had a wonderful season for club, and now for country, helping AmaZulu finish second in the DStv Premiership qualify for the Caf Champions League and then winning the award for the Player of the Tournament as Bafana Bafana lifted the Cosafa Cup. Whether prompting attacks from midfield or helping out defensively, Sithebe was in sparkling form, and certainly gives Hugo Broos another midfield option heading into the World Cup qualifiers