'It's very clear that the team is in high spirits at the moment,' said James Mothibi. 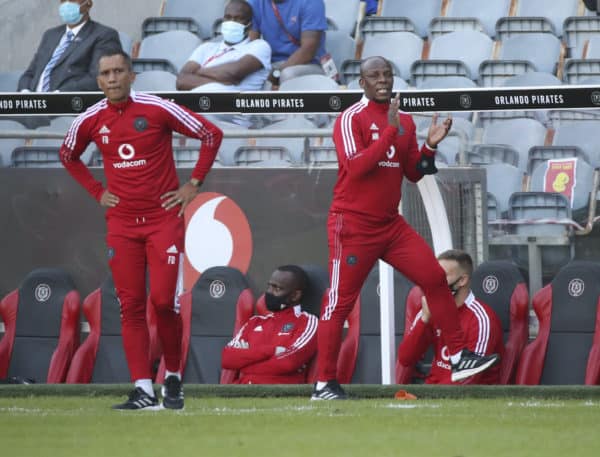 Orlando Pirates’ last two games in the DStv Premiership should be a good morale-booster for them, going into their showdown with reigning champions Mamelodi Sundowns at the Orlando Stadium today, says former Bucs striker James Mothibi.

The Buccaneers head into this clash having secured back to back wins against Swallows FC nd Chippa United, winning 1-0 and 3-1 respectively.

“It’s very clear that the team is in high spirits at the moment, you can’t doubt that. They have done well by beating Swallows and Chippa. And those victories look very convincing from what I saw from the team,” said the former goal-poacher.

“I am sure they will do well in this game, they have no excuse not to win this match because they need consistency. Another thing is that, should they win against Sundowns, it will definitely help them going forward throughout the season. I know it is still in the early stages of the league, but when there is a big game like this one you have to make sure that you get maximum points.”

The Buccaneers have struggled against Sundowns in recent times, with the Pretoria outfit having won four of their last five encounters against the Buccaneers.

Mothibi acknowledges the dominance the Brazilians have enjoyed over the club from Soweto, but insists that what happened in the past can’t determine the future.

“Sure, Sundowns has been winning against Pirates. That we can’t change, but it is in the past. This is a new game. And we must not forget that there are lots of changes that have happened at Pirates. New players, the inclusion of a new coach in Mandla Ncikazi as well. So, that counts a lot. It’s not that Pirates we used to see in the past two to three years,” he continued.

“You can even see that the new players have settled in very well. Another good thing for them is that the striker, Tshegofatso Mabasa is scoring goals. When you have a player like him in the team, high on confidence, you should expect miracles. If he gets the right service, like he has been getting, I’m sure he will score a goal or two on Saturday.”

Pirates host a Sundowns team going for a fifth Premiership title in a row, who will be determined to keep their lead at the top of the league standings. The Pretoria outfit have collected 10 points from four games, while Pirates have eight points from the same number of games.