Mthethwa is demanding royalties from the South African Music Rights Association dating back to 1988. 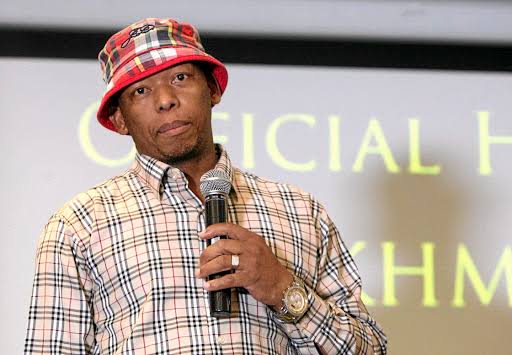 Eugene Mthethwa is protesting for his royalties from Samro. Picture: Twitter

Mthwethwa, for a second day, has chained himself to a pole outside the Samro offices in Johannesburg, demanding royalties as far back as 1988. Mthethwa is a member of the legendary kwaito outfit Trompies.

Both artists are supported by the EFF, with MP Mbuyseni Ndlozi posting a video of Mthwethwa’s demanding answers from Samro about his royalties. Mthethwa said his battle started six years ago.

In a statement on Friday, the EFF said artists were protesting “against the corruption” at Samro.

“In the recent past, many artists have lodged a string of complaints against Samro on the manner in which they have handled their responsibilities.”

The complaints against Samro include that the body was not paying them their royalties in a transparent or fair manner.

The EFF claimed that this was due to “favouritism” and “cronyism” in the company.

“Millions of rands have disappeared unexplained, money that should have gone to artists. There is widespread corruption in the management of Samro with the board entertaining themselves with artist’s royalties,” the statement read.

EFF said the Samro had opposed the Copyrights Amendment Act aimed at regulating how they operate. An amendment to the Act has still not been signed into law by President Cyril Ramaphosa.

The party noted that Madlingozi, as an EFF member and MP, had raised these issues with the portfolio committee for arts and culture but his efforts had fallen “on deaf ears”.

Samro responded strongly by condemning the protest actions by Mthethwa

Samro CEO Mark Rosin said Mthethwa had raised a complaint regarding the calculation of his royalties and that both parties have tried numerous times to amicably address his concerns.

“It is impossible to deal with the issues Mthethwa has raised over the years, where there is no willingness by Mr Mthethwa to resolve the matter other than his way. We have processes that apply to all members and in our ongoing quest for transparency, we will not circumvent these processes for an individual.

“The difficulty Mr Mthethwa has is that he fraudulently gained access to Samro funds, which even led to Samro expelling him as a member. In good faith, the present board reinstated his membership. ”

Rosin said Mthethwa still needed to pay some of that money back, “which his royalty earnings get off-set against. It is not a desirable situation for either party but we have had to deal with the matter through the courts”.

He said as Samro they were disappointed and “alarmed” by the actions of their own member, as his conduct was not “supported by facts”. They deny the claim by Mthethwa that they do not pay claims.

“Samro pays royalties on a regular basis and over the last two days has paid over R60 million to local composers and publishers, a payment widely welcomed.

“Samro exists for the primary purpose of ensuring that members’ rights are observed, advocating for an enabling environment in which music creators can derive the best possible value for their creations and we do so in a transparent manner and are open to audit and verification,” he said.

Rosin concluded that they hoped the artist would engage with them and stop the protest.

As of Friday morning, Mthethwa was still staging his protest.

Eugene Mthethwa and @ndiyagodola are STILL at SAMRO. We’re going on day two for a simple simple matter! @the_dti do something! pic.twitter.com/WY4Xb8ezoM

This is a developing story, more updates to follow.