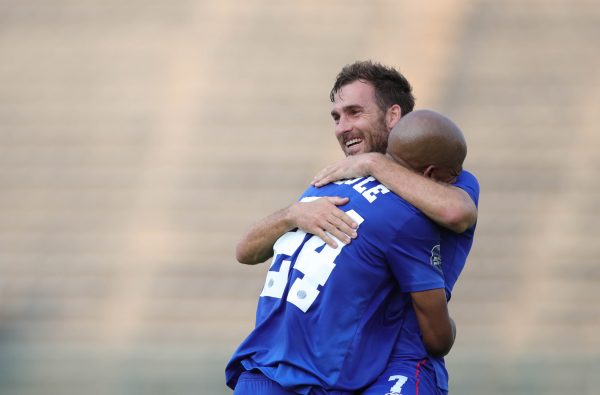 Given his form in the past season and this season so far, it was always inevitable that Bradley Grobler would end up breaking SuperSport United’s goal scoring record that stood for almost 15 years, held by club legend Abram “Fire” Raselemane, who scored 57 goals between 2001 to 2006.

ALSO READ: Variety is the spice of life for Sundowns ahead of Tshwane derby

Grobler overtook the former striker on Wednesday night in a 2-1win over Bloemfontein Celtic in a DStv Premiership contest where he scored in the dying moments of the first-half.

“It’s an unbelievable feeling, when people mentioned the 57 goals, it seemed so far at the time and when I equalled it last week, I thought to myself, the toughest part could be to try and break it and go beyond,” said Grobler.

“Fortunately enough it happened and as I have said before, the club has been good to me over the years, they have stuck with me through thick and thin with injuries and this is a way for me to thank them for the faith they have shown in me. This is a great club with lots of prestige and I am really honoured to have achieved that,” he added.

Surprisingly, Grobler has never won the Lesley Manyathela Golden Boot and this time around, he is leading the pack with 10 goals. He is reluctant to says he wants to win the coveted gong, insisting it is all about contributing to the team.

“To score these goals and contribute is my way of success. I love my time at SuperSport, there have been good times and bad times and right now I am in such a good space, I’m enjoying my football. It would have been really easy from the club to let me go after two difficult seasons of injuries and operations but they showed the faith in me,” he said.

His head coach, Kaitano Tembo says credit should be given to the backroom staff as they made sure to keep the ball rolling in terms of Grobler’s progress.

“I am really proud of him and in the past two seasons he has been scoring lots of goals for us. We don’t doubt his qualities and abilities and he has seen his progress hampered by injuries but we tried to manage him and make sure that he stays match fit and always available at training and matches. Credit should go to the medical team and conditioning team, they have always given him a program to make sure he is fit and is enjoying his game.”