Ngcobo and Mashiane blast Chiefs into an early lead, but City hit the woodwork twice as Gavin Hunt's side cling on for a second successive league win. 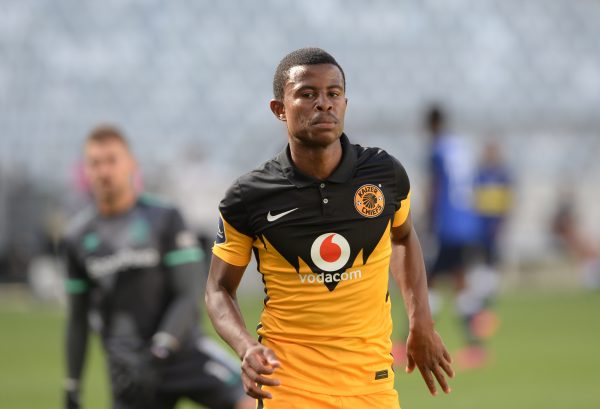 Chiefs lost Happy Mashiane on the stroke of halftime after he was shown a red card for a reckless challenge on Al Ahly's Ashraf Tafwik. Picture: Ryan Wilkisky/BackpagePix.

Kaizer Chiefs were made to sweat in the Mother City on Saturday, but hung on to record a 2-1 DStv Premiership win at Cape Town City.

It was a second league win in a row for Gavin Hunt’s men, who raced into a two goal lead early in the match, but after that were reliant on some fantastic goalkeeping from Daniel Akpeyi, as well as the frame of the goal. Fagrie Lakay did pull a goal back for City, but it wasn’t enough for Jan Olde Riekerink’s team, who are now without a win in three games.

Chiefs have surged up the table after being just one point above the drop zone at the start of the week, and will next take on Tshakhuma FC at home on Tuesday.

Chiefs grabbed the lead in just the 7th minute, Nkosingiphile Ngcobo getting on the end of the ball inside the penalty area after a slick Amakhosi attack. Ngcobo’s effort appeared to completely wrong-foot Peter Leeuwenburgh as it spun past the City goalkeeper and into the net, right in the middle of the goal.

Thabo Nodada hit a powerful shot for City that was too close to Daniel Akpeyi, but Amakhosi doubled their lead in the 19th minute, catching City cold on the break. Kearyn Baccus found Nurkovic, whose fine pass released Happy Mashiane, and the 23 year-old rounded Leeuwenburgh and slotted in his first ever goal in an Amakhosi shirt.

City dominated the rest of the half, finding space down both flanks but couldn’t find a route to goal. Mduduzi Mdantsane’s effort from close range was weak and easily blocked by Daniel Akpeyi, while the Nigerian goalkeeper pulled off an outstanding save to deny Surprise Ralani on the stroke of half time.

Akpeyi was at it again less than two minutes after the break, somehow keeping out a Fagrie Lakay effort from just a few metres out.

Thabo Nodada then pleaded for a penalty after going down in the box, but he did delay his fall and the referee waved his appeals away.

City sohuld have pulled one bacl about 20 minutes from time as Mduduzi Mdantsane slalomed through the Chiefs defence, and his shot beat Akpeyi, but cannoned back off the frame of the goal.

And they did finally get some reward for their pressure in the 83rd minute, as a slick move saw Lakay fire in a superb finish from the edge of the box.

Amakhosi were clinging on now, and their hearts must have jumped out of their mouths as  City’s Craig Martin fired in a venemous strike from the edge of the box in stoppage time, but it brushed the post and went wide, and Chiefs had their victory.