Mngqithi happy with a point for injury-hit Sundowns

"At times we are greedy and we want all three points but we were playing against a good team," said the Sundowns co-head coach. 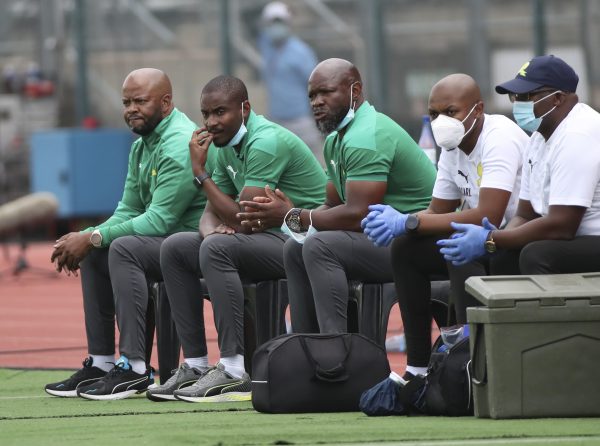 Manqoba Mngqithi was well aware of what to expect in the Tshwane derby against rivals SuperSport United on Saturday, but says their plan did not work out because Mamelodi Sundowns were missing some key players in the 0-0 DStv Premiership draw.

The Downs co-head coach, however, does not mind the point earned as Masandawana are still sitting at the summit of the log, tied on 25 points with Swallows FC. Sundowns were missing a host of players in a list that included Andile Jali, Rivaldo Coetzee, Ricardo Nascimento, Lyle Lakay and Khuliso Mudau, forcing the coaches to field a rather unfamiliar-looking Sundowns side.

“The game came out as we expected, we knew that their wingers would track back to join their defensive line of four to make it six at the back and that is why we used Themba Zwane and Gaston Sirino to try and exploit the space. Unfortunately we did not use those moments because we did get some opportunities with Themba, Mothobi Mvala and Gaston.

“It was not the right match to have players who have not been playing a lot, but due to some medical reasons, we could not have some of the players who could have really given us a little bit more in terms of our passing game. All in all, we did a lot of things well but we were not decisive enough to create scoring opportunities,” he added.

Mngqithi felt getting a point against United was a justified result, given how potent Kaitano Tembo’s men have been in front of goal so far this season.

“It is a good point. At times we are greedy and we want all three points but we were playing against a good team, a team that has not played one match without scoring a goal. For us to get a clean sheet against them also says something.

“We were playing against a very good team, they are solid defensively and they work very hard in getting into good defensive positions quickly. Our transitions could have been better and at some moments I felt we did not have enough fire power. We had good combination play but we were not threatening the space behind the defense,” said Mngqithi.