Orlando Pirates have advanced to the group stages of the Caf Confederation Cup after beating Jwaneng Galaxy FC 4-0 on aggregate at the Orlando Stadium on Sunday. 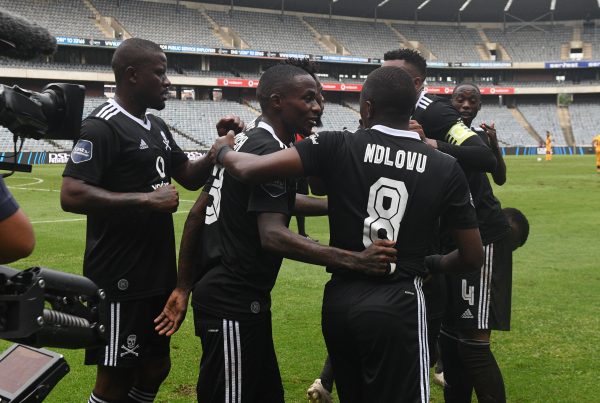 Pirates had won the first leg 4-0 in Gaborone, Botswana last weekend, before getting a 1-0 victory in the second leg.

However, the 2015 Confederation Cup finalists have placed themselves on a good path to once again go on a quest to try to win the tournament this time around.

After getting his first goal for the club last weekend, Jean-Marc Makusu got his first start for the Buccaneers.

The DR Congo international who is on loan from AS Vita has been getting a couple of minutes of game time for Bucs.

There weren’t many opportunities created from both sides early on.

But in the 26th minute, Kabelo Dlamini got to test Jwaneng shot-stopper Ezekiel Morake with a curling shot, but the Botswana shot-stopper was able to make a save.

The Buccaneers threatened the visitors’ box once with some good play by Austin Muwowo and Makusu, but the DR Congo striker failed to capitalise from close range with the game going into break goalless.

In the second half, Bucs looked eager to get a goal. Linda Mtambo, who scored in the first leg open the scoring for the Buccaneers in the 55 minutes from inside box.

The visitors, like last weekend, weren’t able to crack the Bucs back-four.

Pirates head coach Josef Zinnbauer introduced Collins Makgaga in the later stages of the game to replace Austin Muwowo, who also made his first start for the club.

Towards the end of the game, Bucs continued their dominance over the game while attempting to score their second goal of the match.

But in the end, Mntambo’s goal was the only thing to be celebrated in this match as the Soweto club sauntered into the next phase of the competition.

The win saw Pirates record their fourth straight win in a row. This should be a big morale booster for the Buccaneers, who travel to Pretoria to take on SuperSport United in a DStv Premiership clash on Wednesday.