His love for Moroka Swallows has driven Gauteng MEC for Education Panyaza Lesufi to sacrifice his family time to ensure the sleeping giant of South African football rises again. 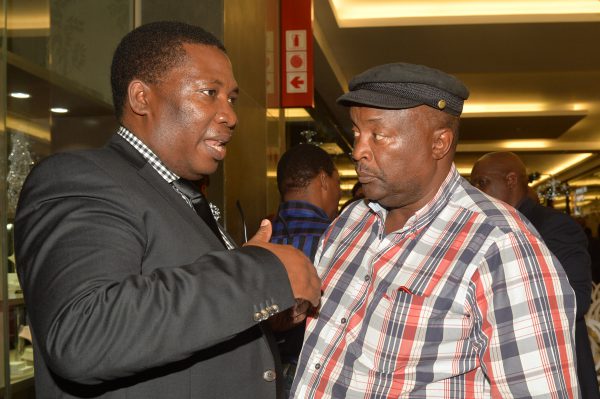 Gauteng Education MEC Panyaza Lesufi and Jomo Sono during the Launch of the book, The Curse of Teko Modise at Exclusive Books, Mall of Rosebank. (Photo by Lefty Shivambu/Gallo Images)

While some have thought his efforts are fruitless and told him he was flogging a dead horse, Lesufi has told the Citizen that the Dube Birds are far from being extinct.

When the team was relegated from the Absa Premiership and the National First Division (NFD) in successive seasons, Lesufi – a self-confessed top Swallows fan – took matters into his own hands and after a prolonged battle for the ownership of the club, he took charge but had to rename the club Swallows FC until everything had been finalised.

He established a funding model that had never been used in the country before where fans were able to buy shares in the club and he now says it was very successful.

“I want to thank the ordinary supporters of football in the country who used their hard-earned money to buy shares. We managed to raise a substantial amount to keep the club afloat,” he said.

The Dube Birds will be Gauteng’s ABC Motsepe League representatives in this year’s Nedbank Cup where they have been drawn against Maritzburg United in the first round.

“Being here (in the Nedbank Cup) is an affirmation that South Africans have an appetite for new ideas and that they are not ready to see Swallows die. The people who bought shares are not Swallows fans per se, but people who love football. This serves as an encouragement and a reward for the hard work. For us to be here is a return in investment for them, I know some who bought shares thought they might have thrown their money onto the river,” added Lesufi.

He admitted that he got over-excited when he announced a deal between Swallows and Free State Stars over a year ago. The move collapsed because they could not meet all of the Premier Soccer League’s requirements for the deal to be passed. He says the experience was a learning curve.

“Contrary to what was reported at the time, we did not come with investors who could not be screened, we missed certain deadlines. Unfortunately they were too tight. I think we became overly-excited and we wanted to get back immediately so we ended up rushing through the process and missed crucial steps and dealines. But it was a good lesson for us … a good experience.

“Right now we are speaking to three clubs and that experience is coming in handy – we are going through the negotiations the correct way. We are going through every step carefully so that we don’t repeat the same mistakes. This time we are not rushing it and I hope it will yield the outcome we want.”

His efforts have not gone unnoticed and a section of the Swallows fans have asked that he become full-time chairman once he has managed to get the club back into the Premiership.

“I have two things that I do in my life – and I feel for my family because I sacrifice their time for these things – my job (as MEC for Education in Gauteng) and Swallows. At the right moment I will apply my mind and make the right decision. But for now my main concern is getting the club back to the NFD and then the Premiership.

“We are speaking to an international investor and at least eight others locally who are interested in our project. We have three clubs we are speaking to – one in the Premiership and two in the NFD – but it all depends on the financial muscle that we can acquire.

“If everything goes as planned, we will be in the professional ranks in the 2018/19 season. But in the meantime we are channelling all our investment and effort into the ABC Motsepe League,” he said.

Swallows are currently fifth in the ABC Motsepe League with 27 points after 17 matches, and trail leaders JDR Stars by six points. But Lesufi remains happy, especially after making the last-32 of Ke Yona.

“It’s a bit of mixed emotions really. In a way it brings the brand back. Some people had written us off and playing in this tournament tells them we are still here. That is exciting. But I am also nervous because I have good players and I am worried that when they are exposed through this tournament they will be taken from us. We invested so much to develop this talent but that’s how football works and the players also need a chance to showcase their talents on a bigger stage,” he said.

To buy Swallows shares, SMS 21, your name and surname and the number of shares you want to 45901. Each share costs R350.