Ubuntu Cape Town secured their fourth win of the season, stunning Shaun Bartlett’s University of Pretoria with a 3-1 beating at Athlone Stadium on Sunday afternoon. 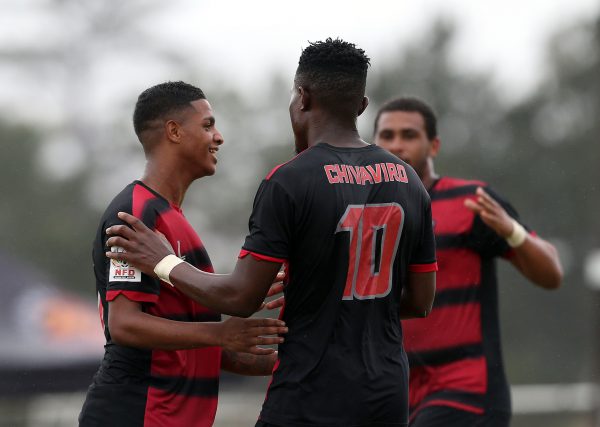 Although the team moved two places up after the win, they are still far from being home and dry and will need to make winning their habit if they are to escape relegation.

Ubuntu’s win makes for a pulsating finish to the National First Division finish as there will be heart wrenching fights in both the top and bottom parts of the division’s log.

Jomo Cosmos 2 (T. Mabula; M. Rasilingwane) Stellenbosch 1 (T. Makanda)
Ezenkosi finally broke their duck and managed a first win for the new year, coming from behind to beat Stellenbosch 2-1. Tinashe Makanda broke the deadlock with his first half goal. But Ezenkosi responded well in the second stanza with Tebogo Mabula and Mpho Rasilingwane ensuring the full points remain with the home side.

Ubuntu CT 3 (R. Chivaviro x2 K Mahlatsi) AmaTuks 1 (T. Moseki)
Ranga Chivaviro – who recently told Phakaaathi that he would not stop scoring – continued his good run with two strikes as Ubuntu hammered AmaTuks. Kamohelo Mahlatsi scored the third for the home side while Thabo Moseki scored the consolation goal for the Pretoria side.

Highlands Park 1 (P. Shalulile) Uthongathi 0
Peter Shalulile hit late in the second half as the Lions of the North ensured they keep a clean distance between them and their chasers. Uthongathi would have felt they were about to cause an upset and eke out a would be valuable point when the Namibian spoilt things for them.

Mthatha Bucks 0 Black Leopards 0
This goalless draw proved too bad for Amathol’amnyama who are now bottom of the standings. But things are not as bad as they seem for Duncan Lechesa’s side as they are just a point behind Ubuntu and Richards bay above them.

Real Kings 0 Royal Eagles 1 (M. Niang)
Mame Niang’s experience came in handy for Eagles who were desperate for full points and the three points earned here saw them jump to 11th on the log. They are still not safe though as they are just three points above last placed Mthatha Bucks.

Witbank Spurs 2 Richards Bay 1
Siyavutha fired themselves back into contention for a play-offs position finish with this win over struggling Rich Boys. The scorers had not been established at the time of publication.

CT All Stars 0 Super Eagles 0
Igugu leKapa remain in the top eight after this draw against a desperate Nest Boys who are looking to move clear of relegation zone.

THE LOG AFTER LAST WEEKEND'S ROUND OF MATCHES #NFD pic.twitter.com/XXI6A505qD