With the long major trophy drought still something that pains Kaizer Chiefs fans, head coach Stuart Baxter promises that they will do everything they can to make sure they get the club where it needs to be. ALSO READ: Zinnbauer aware of demand for more trophies at Pirates Baxter doesn’t really want to make promises […] 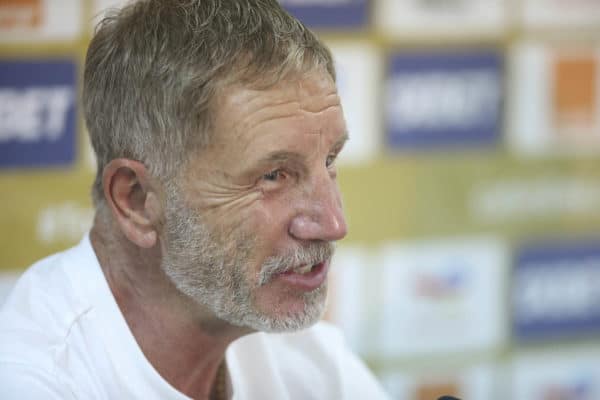 Stuart Baxter has promised he will create soldiers that are ready for battle at Chiefs. Picture: Fareed Kotb/BackpagePix

With the long major trophy drought still something that pains Kaizer Chiefs fans, head coach Stuart Baxter promises that they will do everything they can to make sure they get the club where it needs to be.

Baxter doesn’t really want to make promises that the club will start winning silverware, despite a host of new signings that include Keagan Dolly. Tthe Amakhosi coach, rather, vows to build a Chiefs side that will go into every game with a desire to win and fight to get positive results.

“What I will promise is that the work we do here at Naturena will prepare these soldiers for battle. And when we go into battle, I promise that we will not sell ourselves cheaply,” said the Chiefs coach.

“That will be the promise that I will make. Hopefully, that will lead to good results, confidence in the group, belief in what we are doing and will fuel better results and we will then kick on and start to bring some pride to the supporters, pride to the players.”

The 57-year old Baxter is well aware that expectations will be high, especially as he won two league titles as well as an MTN8 and a Nedbank Cup in his first spell at Chiefs.

“I am not saying it has not been done before. But I am just saying that it’s what needs to be done if we are going to have the sort of results that we need to pick up some silverware,” he added.

Amakhosi have been preparing for their long anticipated clash with rivals Orlando Pirates in a pre-season tie, the Carling Black Label Cup at the Orlando Stadium on Sunday.

However, Baxter won’t be fully in charge of the team against their rivals Pirates, with the game controlled by the respective teams’ fans, who have a champion coach on the bench for the day.